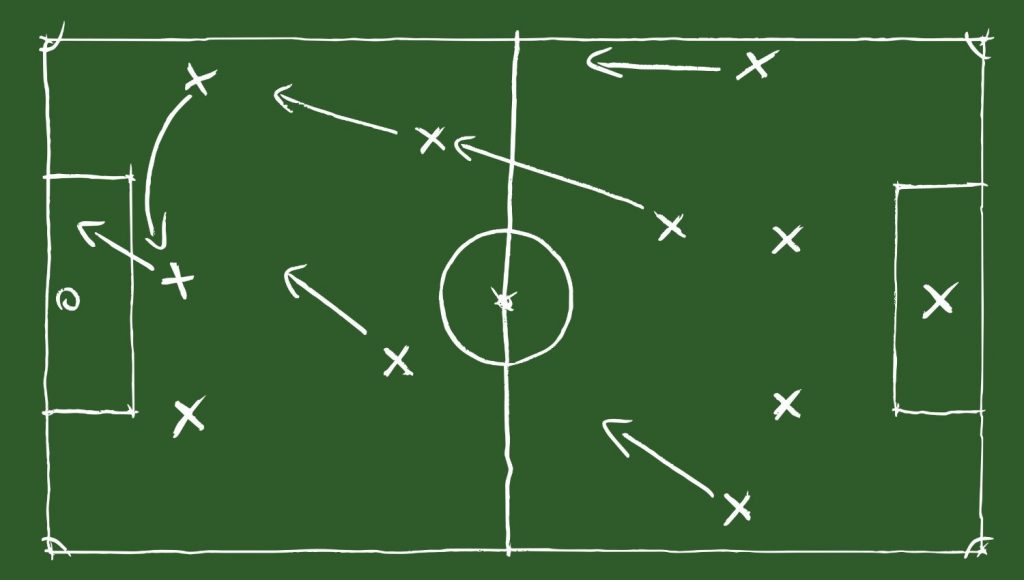 Football Manager changed more than just its name since it’s initial release in 1992. Football Manager tactics have come a long way, the old slider system which enabled us to tinker with every inch of a system has gone. Now we see terminology-based instructions and the game has a real world feel to it.

Since sliders were scrapped ‘beating the match engine’ has become a rarity. The community used to be writhe with varying tactical systems that would win you anything with anyone. Now there is a real focus on ‘player roles’, you need the right players in the right roles to succeed.

I have this at the forefront of every Football Manager tactic I create as there is little point in creating a system using three forwards if I have fantastic wingers for example.

Today I would like to share how I create tactics, this is a broad subject and not possible to cover and understand in one post, so I need subject matter. For this purpose we will use my 4-1-2-3 seen below. For analysis I am using Manchester United, purely because of player suitability and the fact you can all relate to the players, their strengths and weaknesses. 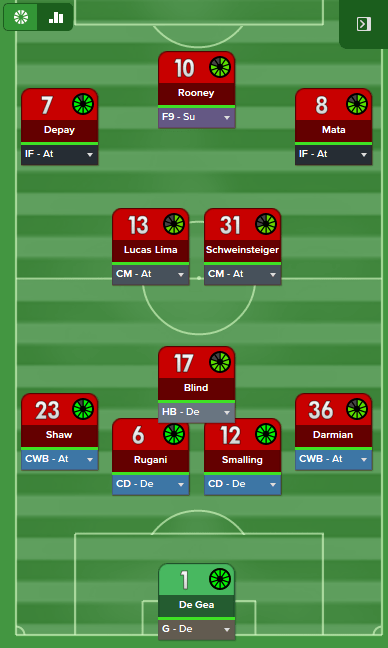 Tactics are all about balance, you need numbers in attack without being short at the back. How you achieve this is the million dollar question.

In this system my central defenders and half back are vital, they almost always sit in and hold the fort leaving more creative players to do their thing. From this foundation the wing backs can bomb on and both central midfielders can attack. 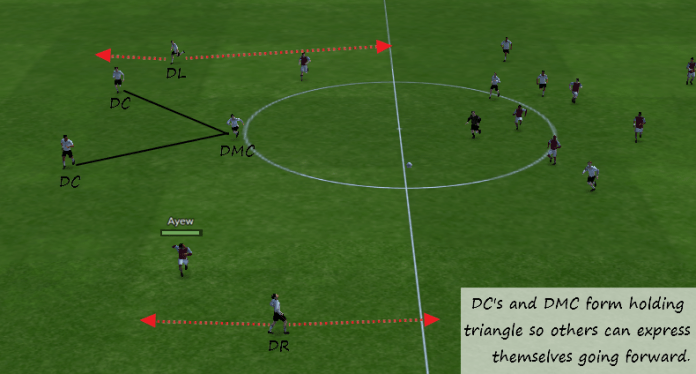 The ‘V’ that creates my stability above allows us to achieve what you see below when we are around the opposition box. 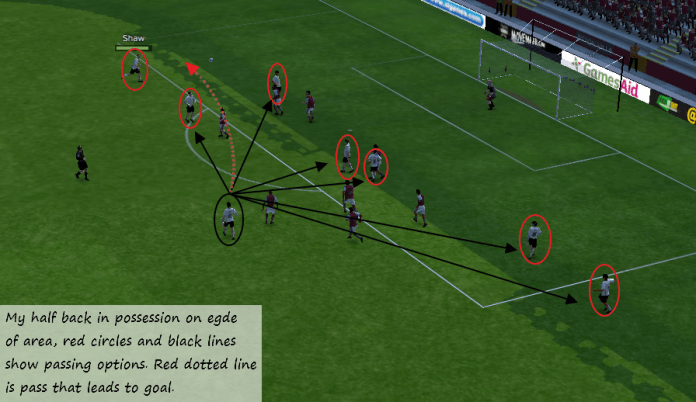 I use a false nine to draw defenders out of position, he will drop deep to accept the ball and leave gaps for my inside forwards to exploit. From here both central midfielders are asked to get forward also creating an overload. 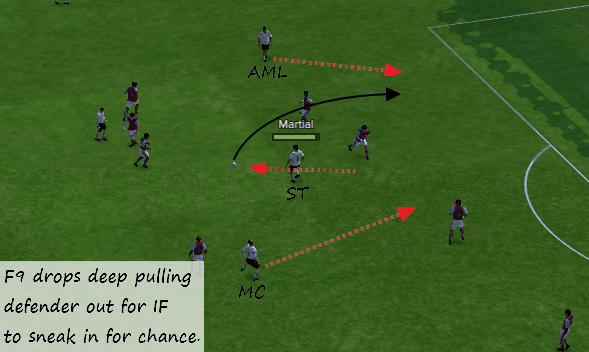 As the inside forwards cut inside I have complete wing backs instructed to overlap recreating width and offering another passing option. 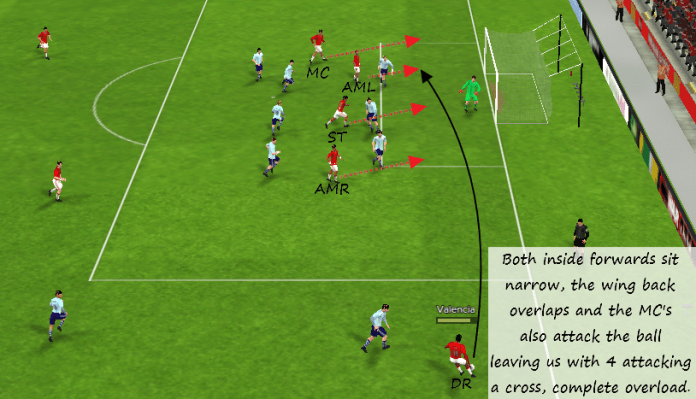 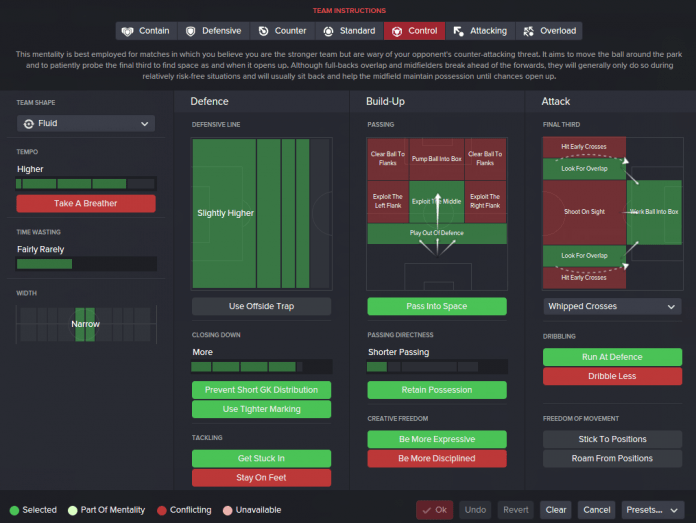 I have already highlighted the importance of creating a system around your squad. Well team instructions are a large part of this. United have technically gifted players so holding possession shouldn’t be a problem and we can do this at a high tempo, the issue we’ll face is breaking down stubborn deep lying opponents.

My team will work the ball into box and retain possession but also close down aggressively and put the opposition under pressure. Possession and pressing are all well and good, but they are nothing unless we create and open holes in the opposition.

I therefore instruct my inside forwards and false nine to roam from position, try risky passes and pass more direct. Do you remember Liverpool’s demolition of Manchester City this season? I want my front three to work just as Firmino, Coutinho and Lallana did, drifting around, picking the holes and just been a general nuisance. 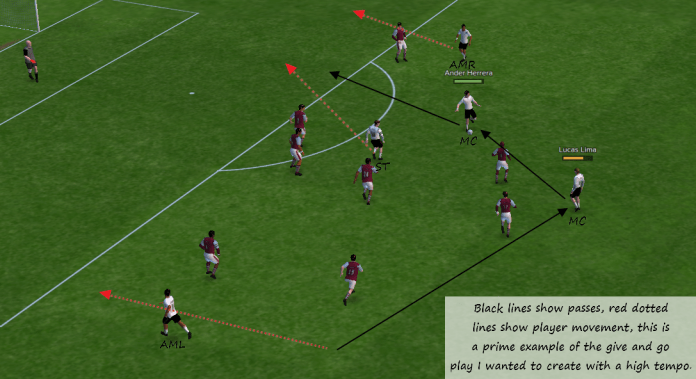 To aid the wing backs and their overlap I ask the inside forwards to sit narrower, this gives the opposition full backs a problem. Do they follow the marauding wing back or drift inside to cover their defensive teammate. 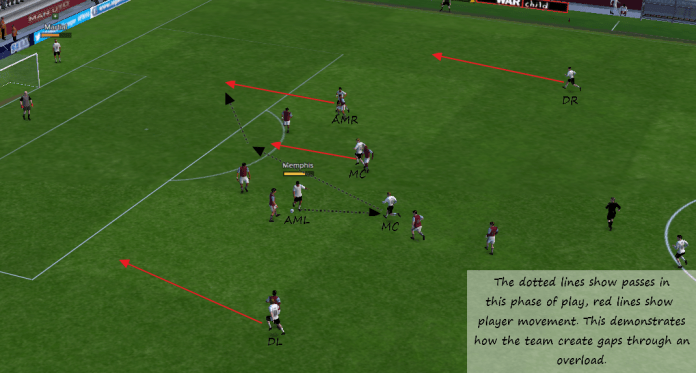 On the opposite end of the scale we have my central defenders, the last thing I want is to drag them out of position and going against the team philosophy of an aggressive press is important in avoiding that. I instruct them to close down much less.

These are just a couple of player instruction examples that make a huge difference and make this tactic tick. All are common sense, it’s just being able to see the picture you want to create and then putting the pieces together in the correct order.

If like me you have an ambitious, risky tactic you will need a contingency plan. Out of my 10 outfield players you could argue 7 go full throttle into attacks, when playing away from home to strong opposition this can pose a problem. 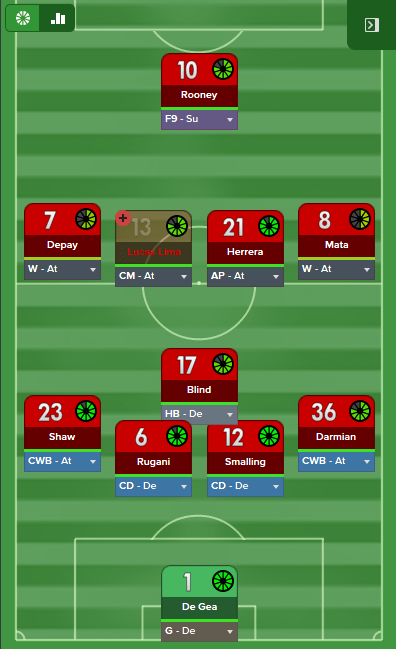 My alternative tactic is a near duplicate of the original with few changes, but its these little tweaks that transform a system.

AMR/AML change to MR/ML wingers – I find the inside forwards get too far forward on the defensive shoulder and are hard to find when under pressure. Bringing them back gets them involved more in build-up play.
Change DR/DL from CWB to full backs – The complete wingbacks are a little kamikaze, getting forward at every opportunity, I want this less often and with less commitment.
Change one of the central midfielders to advanced playmaker – Changing the roles above loses a little spark so having an advanced playmaker leaves me with one more person prepared to create.

We have established tactic number one as too risky, I deem this true when travelling away to any team in top form or any of the so called top six, but I only realised this after a tough away day to Liverpool. Sometimes you need to react to circumstance.

I am not writing this so you can copy my style, instructions and ideas, this is to create a light bulb moment and explain how tactics are simply complicated common sense. Common sense because when you find the right answer it seems simple. Complicated because there is not just one problem to solve, there are many and one instruction/role affects the next…we are back to my favourite word again, balance.

For instance, without my complete wing backs bombing on I would have little width and probably give away possession. Equally without sacrificing one midfielder as a half back I would be exposed. If my inside forwards didn’t sit narrow then would my wing backs have so much freedom? And what about my false nine, if I changed to poacher and he hugged the defensive line would my IF’s and MC’s find gaps in the opposition?

All you can do is apply common sense and test, test, test. After all you could be just one role change away from success.

Creating a Football Manager tactic – tips to live by

Below are a few simple things you may be doing wrong already. 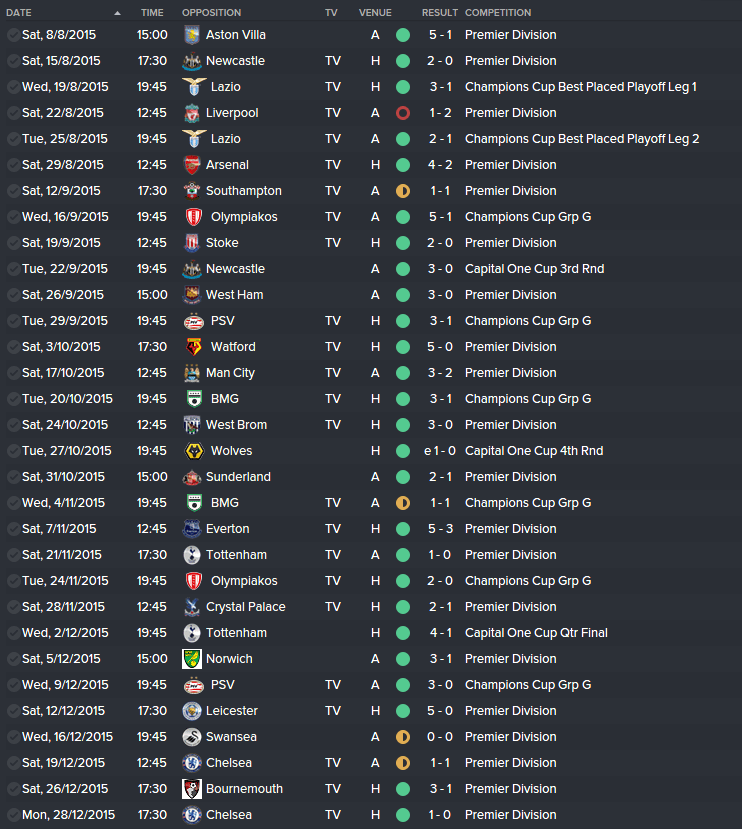 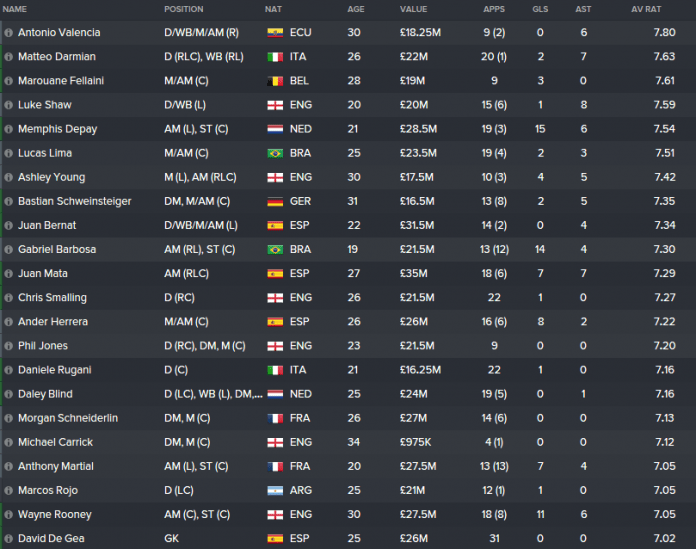 Footballmanagerstory.com (FMS) is an official Sports Interactive approved fan site and one of the most popular out there, providing top notch FM 2016 downloads, tactics, guides and player profiles.