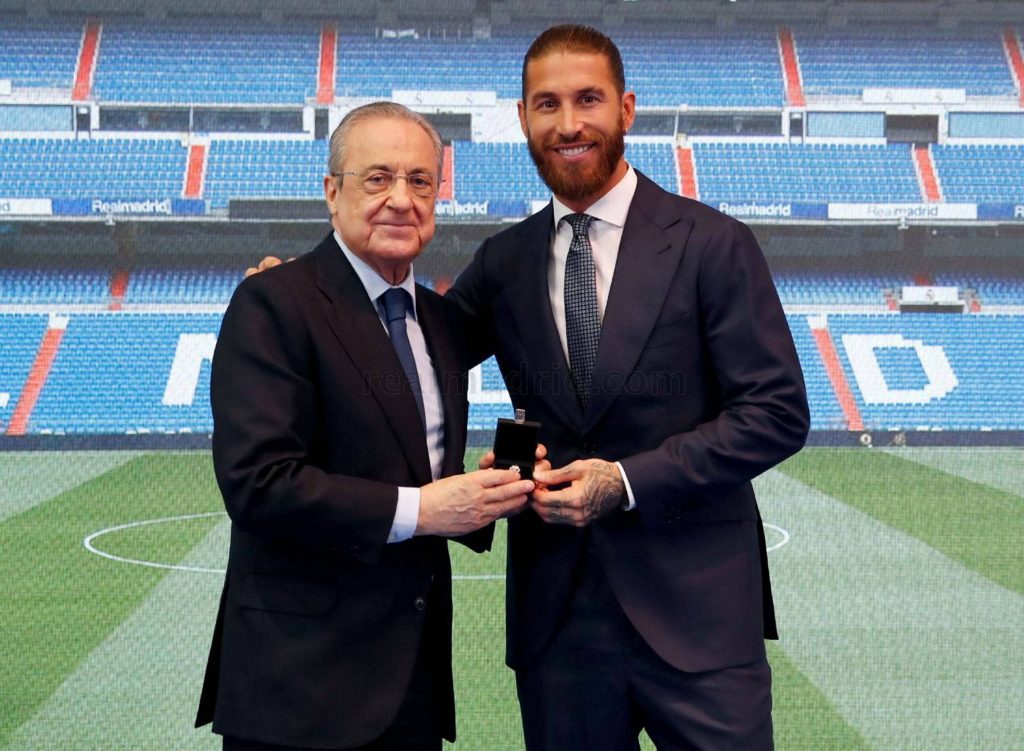 In an exclusive interview with El Transistor, Real Madrid president Florentino Perez was questioned about various topics, including the future of defender Raphael Varane.

Los Blancos ended the previous campaign on a disappointing note as they finished three points behind rivals Atletico Madrid, who won the La Liga title after seven years.

The club have yet to make any significant signings this summer, but they recently confirmed the departure of Sergio Ramos after 16 years at the club.

When asked about the former club captain, Perez said that the Spaniard was like a son to him and acknowledged that the farewell was a bad day.

Ramos had a one-year contract offer on the table. However, it had an expiry date that had passed before he was prepared to accept the proposal.

Perez confirmed the same during his interview and opened the possibility of Ramos returning to the club one day in another capacity.

“So yes, his farewell was a bad day for me.  I admire Sergio Ramos – he’s been a legend for us.

“I told him that the offer had a deadline, and he did not admit it. Sergio will return one day in another capacity.”

Meanwhile, there has been much speculation over Raphael Varane’s future, with his contract expiring at the end of the 2021/22 season.

Manchester United were recently reported to have failed with an approach, but Perez insisted that the club have not received any offers.

He said that Los Blancos will hold negotiations with Varane after Euro 2020 but refused to rule out the Frenchman leaving the club.

He added: “I don’t know what will happen with Varane. He’s in the Euro’s now, and we will talk to him when he returns.”

“We haven’t received any offer for Varane. If he wants to leave, he’ll say it.”

Perez has built his reputation with his ‘Galacticos’ signings over the years. Kylian Mbappe has been heavily linked with the club this summer.

When pressed on the speculation, Perez distanced himself by citing that Mbappe is contracted to Paris Saint-Germain, which must be respected.

The 74-year-old said that he is capable of bringing the world’s best players to the club but refused to speak on either Mbappe or Erling Braut Haaland.

He said: “Mbappe? He’s not a Real Madrid player, so I cannot talk about him. I know what the fans want. We are working on a rebuild.

“Mbappe is a PSG player, and that must be respected – you know I cannot talk about him. I won’t talk about Mbappé and Haaland.”

Perez also revealed that Marcelo would be the first-team captain next season, and the club have no reason to part ways with him this summer.

Elsewhere, Brahim Diaz has been linked with a loan move to AC Milan with the option to buy. Perez confirmed that the attacker could return to the Serie A giants.

Los Blancos plan to retain a buy-back clause for the Manchester City graduate.

Towards the end of the interview, Perez emphasised that he is still working on the European Super League (ESL) despite the withdrawal of nine of the founding clubs.

The Los Blancos supremo said that the Premier League clubs were pressured by UEFA and hit out at UEFA president Aleksander Ceferin over his increasing salary.

“What failed in the Super League?” said Perez. “Nothing, we’re still working. Why should UEFA rule over us? The fans rule football.”

“The English teams felt pressured by UEFA, and they signed something that they are not allowed to sign.

“Ceferin tried to kick us out from the Champions League, but the courts told him it’s illegal. And now, let’s see what happens.

“They [UEFA] want to maintain their privileges. We lose €800 million, and Ceferin increases his salary. In what country do we live?”