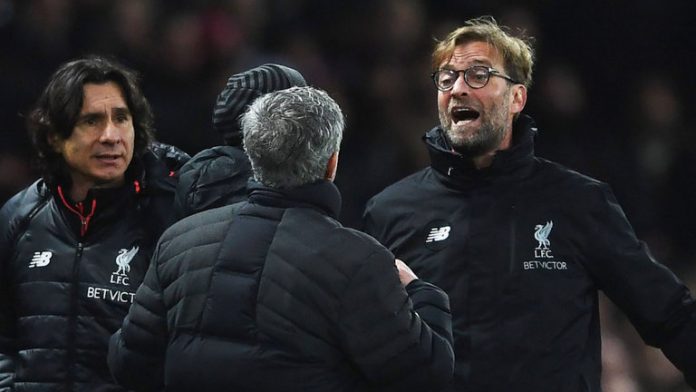 The Premier League once again provided fans with plenty to discuss over the weekend.

Liverpool missed a golden opportunity to close the gap on Manchester United, Watford made a mockery of Paul Merson’s punditry skills and Wayne Rooney’s late penalty probably saved Ronald Koeman from the sack.

Sportslens takes a look at five talking points from the weekend:

We’re forever being told that Jurgen Klopp is the right man to take Liverpool forward, but there was little evidence of that at Anfield on Saturday.

For all the pre-match talk about Liverpool’s leaky defence, their lack of a cutting edge was plain to see against Manchester United.

Jose Mourinho came in for plenty of stick for allegedly ‘parking the bus’, yet the home side appeared equally happy to settle for a point.

There’s been plenty of hype over Klopp’s managerial ability, but one win in their last eight games is a worrying statistic for a supposedly big club like Liverpool.

Jesus back with a bang

Gabriel Jesus ended four games without a goal with a double in Manchester City’s impressive 7-2 victory over Stoke City.

Jesus led the line well for Pep Guardiola’s side, to make it four goals in a week having scored twice for Brazil in a 3-0 win over Chile in their World Cup qualifier.

The 20-year-old is is likely to have little dips in form as he continues to mature, but he was certainly a handful against Mark Hughes’ side this weekend.

Zaha can fire Palace to safety

Wilfried Zaha’s return from injury was the catalyst for Crystal Palace to record their first victory of the season.

Zaha was a constant threat to Chelsea’s defence and he fully deserved to grab the winning goal.

Despite their awful start to the campaign Palace are only five points adrift of safety and the Ivory Coast forward can help them bridge that gap.

Paul Merson’s predictions on Sky Sports are often laughable and he appears to have surpassed himself this season by tipping Watford for relegation.

The former Arsenal star had made it clear he’s not a fan of manager Marco Silva, but the Watford boss had the last laugh after leading his team to a deserved 2-1 victory over Merson’s old side.

The result took Watford into the top four and while it’s probably too much to expect them to stay there they certainly don’t look like a team that’s heading for Championship.

There was a certain irony about Wayne Rooney salvaging a point for Everton at Brighton on Sunday.

The former Manchester United star has come in for plenty of grief this season, yet when his club needed him Rooney delivered.

Everton boss Ronald Koeman was rightly critical of Rooney over his drink-driving arrest, but the 31-year-old’s late penalty will probably keep the Dutchman in a job for the time being.