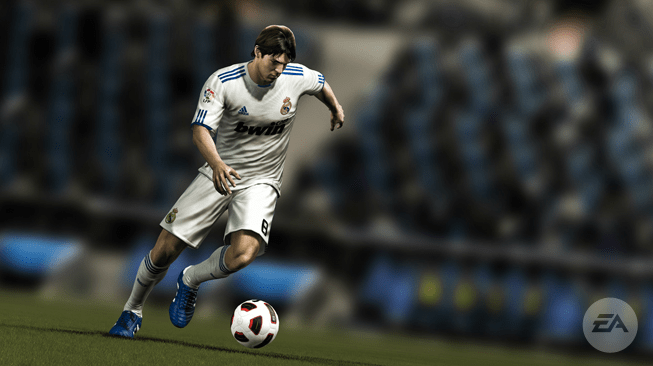 Soccerlens was invited to an exclusive press preview of FIFA 12 last week and we were some of the lucky few to have a hands on experience of playing the game before its official release.

Well I must say that the new FIFA 12 is pretty cool, they have really gone all out on this one, it has some amazing game features that make the game play very realistic, including a number of key features such as ‘precision dribbling’, ‘tactical defending’ and ‘ Player Impact Engine’.

Personally my favorite feature is the precision dribbling and the Player Impact Engine; the precision dribbling allows you to dribble whilst holding a player off the ball to make space for passes and the player impact engine actually gives the players a realistic impact from tackles and challenges during the game. Can’t wait to play Real Madrid v Barcelona that should be interesting!

I also got to meet with one of the men with the best jobs in football, no not Sepp Blatter 🙂 but EA Sports FIFA producer David Rutter.

Here are a couple of Q&A’s from our chat:

David Rutter – The little flying birds in the stadium during matches

DR – I am not bad but have played against a few really good people in FIFA World Cup tournaments, the Mexicans seem to produce some of the best players, French as well. I also find during the tournaments that English and Spanish players are very quite and focused when they play FIFA

SL – how many people work on the team to produce the ideas behind FIFA 12 ?

I also found out that David is a Leicester City fan and his football hero is Gary Lineker!

Looking forward to the relase of FIFA 12 (out in Fall).