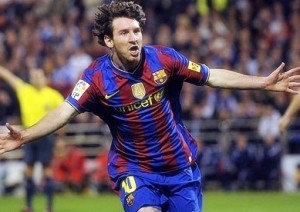 Barcelona can go top of the table with a draw or win as they host Osasuna in the Spanish La Liga.

Lionel Messi heads into the match with a hat trick in their last to La Liga matches and now has 25 goals in 24 matches. Barcelona are second in the table on goal difference (they trail Real Madrid by two) but can go top of the table on Wednesday. Osasuna are in 13th place in the table and eight points above the relegation zone. They are also winless in their last six matches in La Liga.

Barcelona have won three out their last four league matches and are 12-1-0 with a +29 goal difference at the Camp Nou. Osasuna is 4-2-8 with a -5 goal difference in away matches. Their leading goalscorer is Walter Pandiani with seven in La Liga matches. Injuries for the match include Xavi and Eric Abidal for Barcelona, while Osasuna are without Pandini, Carlos Aranda, and Dady.

It will be a tough match for Osasuna to get a draw or even think about a win. Barcelona have been in great form all season and Messi’s performances have been nothing short of spectacular. Some are calling him one of the greatest of all time and better than Argentine legend Maradona.

The overall strength of Barcelona combined with Osasuna’s injury will make for a one-sided match. The home team will have no problem getting the three points and Messi could score another hat trick. He continues to improve and his potential seems unlimited.

Barcelona will win the match 4-1.

You can watch Barcelona v Osasuna live online as well as dozens of other La Liga and European football games. Read our live La Liga football page for more details.