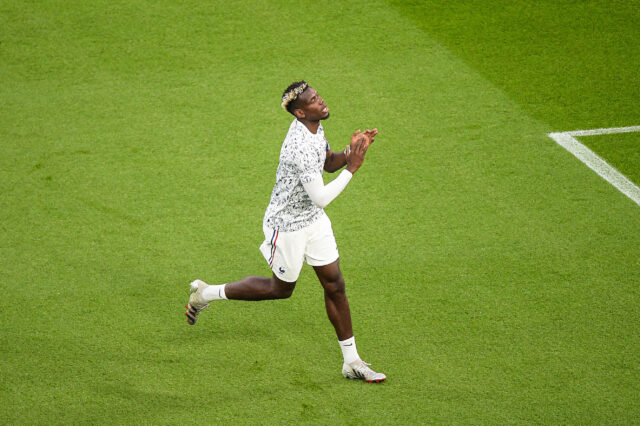 Defending champions Portugal drew 2-2 with France to qualify for the last 16 of Euro 2020 as one of the best third-placed teams.

Cristiano Ronaldo scored twice – his 108th and 109th goals – both from the penalty spot.

However, it wasn’t enough to earn Portugal victory as Karim Benzema scored twice to ensure France progress to the knockout rounds being top of the group.

Benzema broke a six-year goal drought, his first goal came from the spot, while his second goal came from a stunning pass from Manchester United’s Paul Pogba.

It was a superb performance from Pogba who has been outstanding for France in the European championships to date.

UEFA’s Euro 2020 Twitter page posted a picture of Pogba describing him as “world-class”. Many fans have responded to that post.

He was awesome. World class ability no doubt but world class players turn up every game. Cant just put in 6/10s for 60 games a season and then a few 9's and 10s for your country and get world class tag. Nooo way.

At times he produced a very good but often match-by-match poor game for his current team. Lazy.
I hope this overvalued Frenchman is taken away by a solvent team and ManUtd can build on its price.

the kind of weight he puts on to the ball for those passes, i mean like its been lowered down from a needle, the precision the balance….Truly Fabulous

He was my man of the match…pure class

Wasting his time at United. He should leave that toxic environment

It won’t be an exaggeration to say that Pogba has been one of the best midfielders of the tournament so far.

It is a mystery why Pogba has failed to replicate his best form for United, and that his future will be speculated about after the end of the tournament.

United are keen to keep him at the club and offer him a new contract extension. He has a contract at the club until 2022, and many fans want United to sell him to the highest bidder.

Pogba is truly a world-class midfielder but he needs a proper system to flourish.