It was only a few days ago that Ligue 1 club AS Monaco confirmed the signing of James Rodriguez and Joao Moutinho from Porto for €70 million. Last night AFP tweeted this:

Dmitry Rybolovlev is pumping serious money into the French second division champions. According to AFP, Monaco will dish out €70 million for Radamel Falcao and Victor valdes and it is only their first season back in Ligue 1 after they were relegated in 2010-11. It is safe to assume an immediate charge for a Champions League spot is the aim for the Russian billionaire. 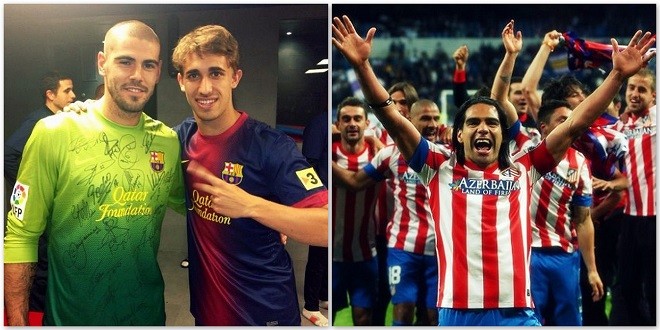 Radamel Falcao joined Atletico Madrid two years ago in a €40 million deal after winning the Europa League with FC Porto. The 27-year-old scored 28 goals this season and won the Copa del Rey final against Real Madrid. It is reported that AS Monaco activated the €60 million buy-out clause fee in the Colombian’s contract with Atletico.

Victor Valdes has been part of the first team at Nou Camp since 2002. It wasn’t until the 2004-05 season that he emerged as a first-choice goalkeeper. He remained the first-choice of two great eras of Frank Rijkaard and Pep Guardiola. After Valdes announced that he will not renew his contract, it was likely that Barcelona would have accepted any moderately good offer for the Spaniard.

AFP further reported that both the players are in the Principality of Monaco to finalise the deals and appear for medical examination today. If the deals go through, Monaco would have spent €140 million already – out of the €200 million budget he pledged on taking over the club.

The entire summer is still ahead of us and AS Monaco has already sent a message to the entire Ligue 1 that they are a force to be reckoned with. Just when it seems that PSG has a chance to dominate the league, they will now have a worthy competitor in the league and in the transfer market.