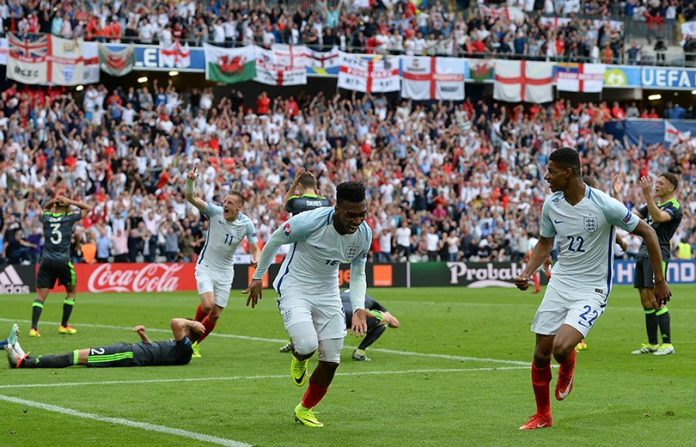 Liverpool striker Daniel Sturridge scored in the 92nd minute as England secured a last-gasp 2-1 win against Wales to move to the top of the Group B table.

In Group C, Germany were held to a drab goalless draw by Poland but the group is still wide open after Norther Ireland secured an emphatic 2-0 win over Ukraine.

Roy Hodgson’s bold move in the second half

The England manager named an unchanged starting XI that drew 1-1 against Russia in the opening match. Wales were happy to sit back and defend and although England dominated possession they couldn’t create enough clear cut chances. To make the matter worse, the Three Lions went on the back foot at the break when Gareth Bale scored from a stunning free kick 35 yards out, although England goalkeeper Joe Hart should have done better with his gloves work.

Credit must go to Roy for quickly spotting the problem and rectifying it at the earliest. Both Harry Kane and Raheem Sterling failed to exert an influence in the game, and he replaced them at the break. Any other manager (or even Hodgson in another day) could have waited for another 15-20 minutes before taking the decision, but here, he was quick enough to make those changes.

And it paid off. Both Jamie Vardy and Daniel Sturridge made an instant impact and the body language of the English players changed completely when the Leicester City striker equalised in the 56th minute.

Hodgson made another bold decision by bringing on young Marcus Rashford in place of Adam Lallana, as he looked for full three points. The 18-year-old only made his senior Manchester United debut in February, and Hodgson showed enough faith in him by throwing the striker at such a pressure situation.

In the end, Hodgson got his reward for being brave, as Sturridge scored a fantastic goal right at the end of the match to seal full three points for England.

Kross brilliant, Germany’s lack of goals in a huge concern

Having won their opening games respectively, both teams tried to play safe, without taking enough risks. Germany had 64% possession and 15 shots in the match, but it was Poland who created more clear cut chances.

Both Robert Lewandowski and Arkadiusz Milik frequently asked questions of the German centre-backs, with the later missing couple of gilt-edged chances.

Goal scoring seems a serious issue for the Germans. Mario Gotze plays the false nine role but he hasn’t responded instinctively as a striker. Plus, his short stature means he is not much of an ariel threat either. And yet, the German kept on putting crosses in the box, and the Polish defenders were more than comfortable dealing with it.

Arsenal superstar Mesut Ozil is often looked up to as the player who would create a moment of magic, but so far Toni Kroos has replaced him as the team’s primary playmaker. Kroos, a reported Manchester United target, who would cost more than £95m as per his brother, was superb against Ukraine and he was brilliant against Poland as well.

With an enviable 92.6% passing accuracy, more than any other German player, he also created three chances and had three shots in the match. Kroos has a metronomic presence in the midfield who is expert in ball circulation and not making defence-splitting passes. Ozil is capable of that but with other forwards, Julian Draxler and Thomas Muller, not making enough penetrative runs, the Arsenal midfielder couldn’t send those through passes in. Germany kept on playing passes in and around the final third but only 6% of their total passes (650) had reached Poland’s penalty area.

Both the teams will be happy with the result, but the group has become all the more interesting after Northern Ireland secured a 2-0 victory over Ukraine.