The juggernaut rolls on. Leicester City cement their position at the top of the EPL Table after earning a 1-0 victory over Crystal Palace in the Premier League on Saturday.

In the early kick off, Arsenal produced a near-perfect away performance, as they won 2-0 against Everton at Goodison Park, thanks to first-half goals from Danny Welbeck and Alex Iwobi.

Chelsea came from behind to manage a draw in the afternoon kick-offs, as they held West Ham United to a 2-2 draw at the Bridge, where Cesc Fabregas scored a brace for the home side.

Stoke City and Norwich City also secured away victories, while Swansea City were the home side from Saturday fixtures to triumph, as they beat bottom placed Aston Villa 1-0 in the late kick-off.

Here, let us take a look at the latest Epl table and all the results, followed by major talking points from Premier League round 31 games. 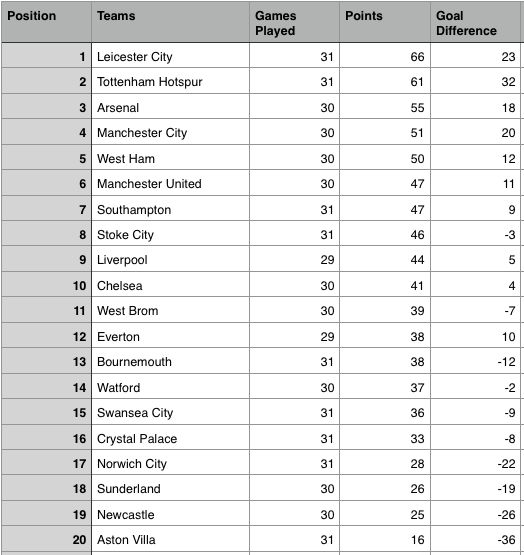 Four of Leicester City’s last five Premier League have resulted in a 1-0 win for the Foxes. The goals may have dried up a bit, but they are showing the spirit of a champions side. There is now a belief in the team that they can win the title.

Riyad Mahrez and Jamie Vardy have been the main architect behind their impressive rise, and once again they combined to score the only goal of the match, earning three-points for the Foxes.

What has surprised everyone is Leicester’s form away from home. They have been so compact, and one could see the confidence is overflowing in the side. Mahrez has been simply brilliant away from home, with 12 of his 16 goals have comes travelling away.

Arsenal bounced back from a disappointing week, where they bow out of Champions League and FA Cup within a space of four days, with a solid away performance at Goodison.

The Gunners have a relatively easy fixture from now and till the end of the season, and apart from trip to Etihad, all are winnable games. They must look to win their next seven games and hope Leicester and Tottenham drop points along the way.

Everton are such an exciting side to watch. They play a nice brand of attacking football, and have a solid bunch of promising young talents. But, as with the case of Martinez before, Everton are so poor in defending. It seems like they do not have any plan B to approach a game, Martinez’s flawed philosophy is partly responsible.