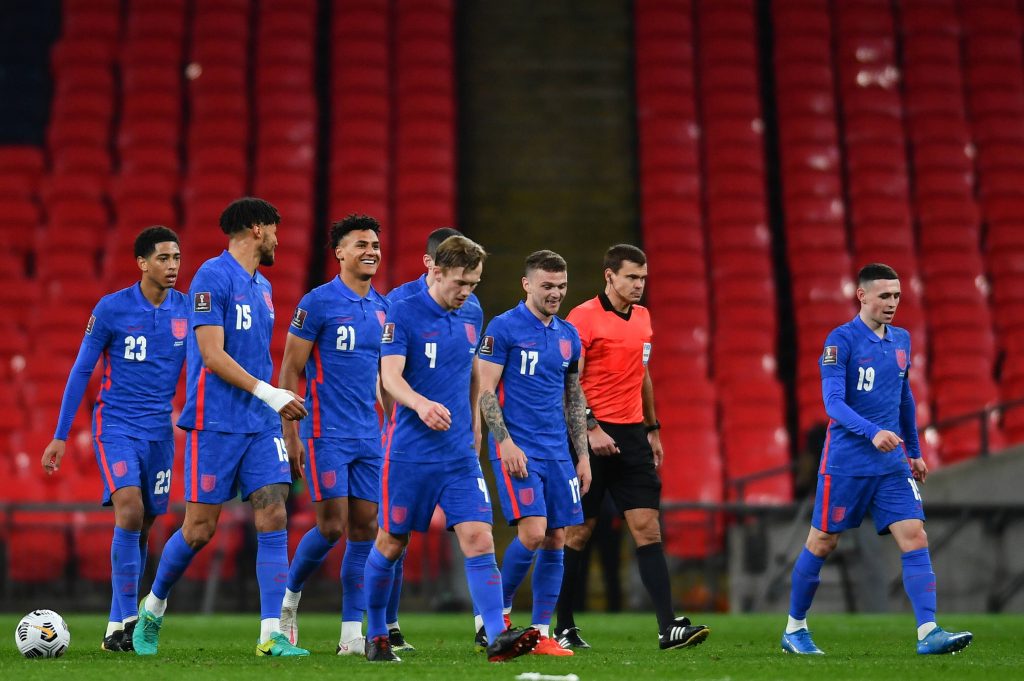 Goals from Dominic Calvert-Lewin (2), James Ward-Prowse, Raheem Sterling and Ollie Watkins ensured a comfortable evening for the Three Lions against a country with the worst FIFA ranking in the world.

Manager Southgate named a very different looking side for the game than the one that we have become accustomed to recently.

He became the first person to manage and play for England 50 times and made 10 changes to his starting 11 from the last international run-out, a 4-0 triumph over Iceland in the Nations League last November.

Injuries to current number one goalkeeper Jordan Pickford and Aston Villa’s Jack Grealish kept the pair out of this round of international fixtures.

The home side played in their all-blue away kit and lined up as follows:

The Sammarinese have only ever won one game in their 31-year history, a 1-0 win in a friendly victory over Liechtenstein in 2004. With only six draws in that same time frame, Varella’s side faced an impossible task.

However, they have been on a good run recently, picking up two draws in their last three outings – both 0-0 against Gibraltar and Liechtenstein.

As expected, the game started as it would go on with England dominating the play, especially in wide areas with Reece James and Ben Chilwell given plenty of space to roam on the attack.

James should have had an assist after just six minutes. He raced into the box and fizzed a ball across goal which only needed to be tapped in, but was let down by Calvert-Lewin, who somehow missed the opportunity to put his side ahead.

Despite being early in the game, San Marino put men behind the ball at every given opportunity, but that didn’t stop the Three Lions from creating chances.

Raheem Sterling missed two headers in quick succession from close-range before Elia Benedettini produced his first save of the evening to prevent Jesse Lingard from the edge of the box. It certainly wouldn’t be the last time the ‘keeper was called into action.

Then came a missed chance by defender John Stones. The Manchester City man has been prolific this season and met a cross from the left wing with the goal at his mercy but couldn’t take the opportunity and hit the ball awkwardly over the bar. 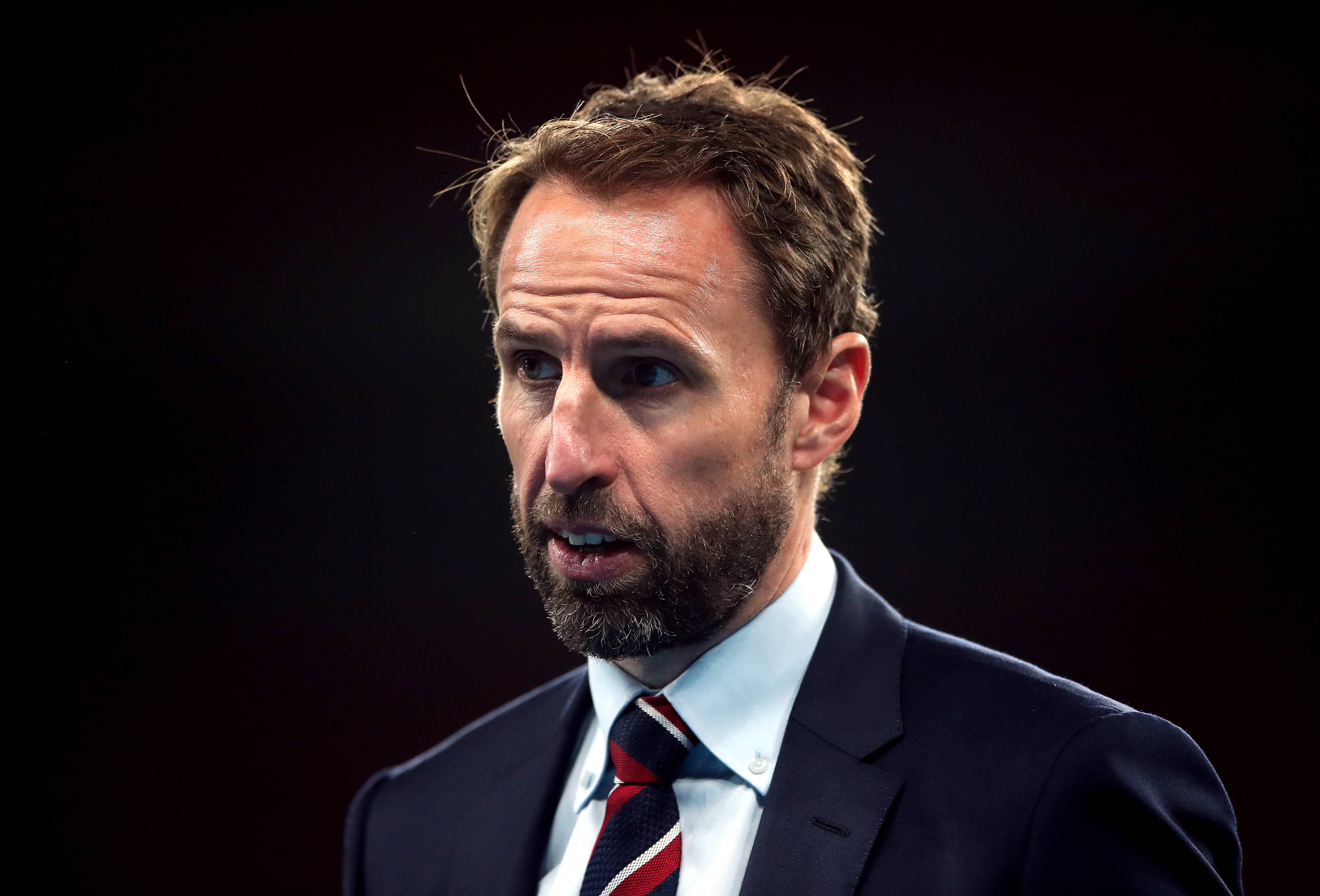 Southgate’s side were becoming frustrated, but it wouldn’t be for long.

They were in front before the quarter of an hour mark as Southampton’s James Ward-Prowse grabbed his first England goal in his fifth appearance for the national side, the first coming back in 2017.

Instrumental throughout, Chilwell linked up well with Sterling and Mason Mount to drive into the box and pull the ball back for Ward-Prowse to fire home through the legs of a defender – a smart finish.

Having failed to score a goal since November 2019, San Marino found themselves behind at Wembley, and it wouldn’t be long before England’s advantage was doubled as Calvert-Lewin avenged his early miss.

James carved out the opportunity for the Everton-man with an inch-perfect cross into the area from the right-wing, and Calvert-Lewin duly obliged by beating Cristian Brolli to the ball to head home.

An emphatic first-half tirade on the San Marino goal continued, and it took a great acrobatic save by Benedettini to stop Chilwell’s powerful shot going into the top corner of the net.

The keeper – who plays in Italy’s third division (Serie C) – thrust himself towards the ball and clawed it around the post for a corner.

Both Calvert-Lewin and Mount then saw chances go begging before captain Sterling made it 3-0 as the clock ticked past the half-hour mark.

Trying to play out from the back, ‘La Serenissima’ had their pocket picked close to their own box, and Sterling beat his man to cut back and put the ball into the back of the net from close-range with the help of a deflection off a defender’s leg.

It could have been more for the home side before half-time, but they were wasteful with their chances.

Calvert-Lewin volleyed wide with an open net to aim at, and Lingard scuffed the ball the wrong side of the post on the half-volley following a fantastic counter-attacking move by England from a San Marino free-kick, one of the rare times that the opposition found themselves in the opposition half throughout the first 45 minutes.

Lingard was once again denied by Benedettini in the area as the keeper got down well to prevent his rasping shot from finding the net.

Russian referee Kirill Levnikov blew the whistle for half-time with England 3-0 up having had 84% of the possession and 17 shots at goal. Nick Pope was yet to be troubled and could have sat in the stands for the whole game.

Ahead of the second-half, Southgate made four changes to his side in what may well have been pre-planned substitutions.

On came Jude Bellingham, Tyrone Mings, Kieran Trippier and Phil Foden. They replaced Mount, Stones, James and Sterling, with the latter handing over the captain’s armband to Conor Coady.

The first real action of the second half saw Coady go down after an accidental blow to the face from Mings when attacking a corner, but the Wolves defender played on without an issue having received the appropriate medical treatment.

Compared to the first-half, England didn’t start the second quite as slick or quickly. Passing had been slowed down, and the San Marino blockade seemed to be dropping deeper and deeper.

A fourth goal did come through Calvert-Lewin, although he had Lingard to thank for one of the easiest goals he will score in his career.

Much like James in the opening stages of the game, Lingard burst into the area with a pass from Chilwell and zipped it across the box, leaving the Sammarinese defence with no chance. Forward Calvert-Lewin just had to tap-in from no more than two yards out, and this time he obliged.

With two goals to his name, that was the final action of relevance for the 24-year-old. He left the field to be replaced by Aston Villa Striker Ollie Watkins, who made his England debut in the process.

Both Lingard and the highly-rated Bellingham saw shots comfortably saved before Benedettini produced yet another stunning save to deny dead-ball specialist Ward-Prowse with a free-kick struck from 25 yards out. 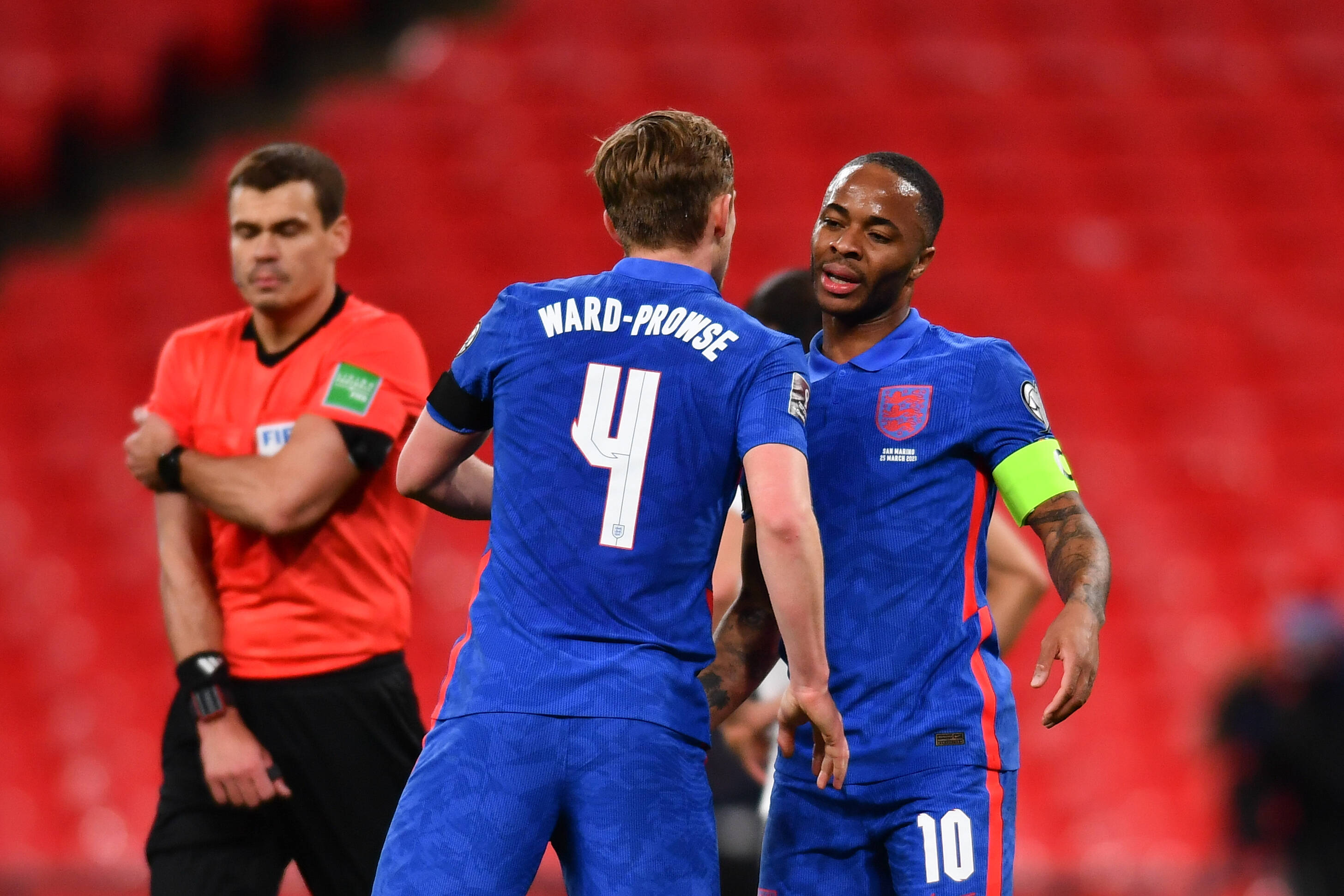 Ward-Prowse has scored four free-kicks this year for club side Southampton in the Premier League, but the keeper got fingertips to his powerful strike this time around and turned it onto the post.

Benedettini may well have been on the losing side at Wembley, but he put in a performance to be proud of without a shadow of a doubt.

England had registered 37 goals in the six previous meetings of the two nations and had never failed to score at least five against San Marino, but this record looked in doubt when Borussia Dortmund star Bellingham passed up two good opportunities in quick succession.

An attempted bicycle-kick from him went wide of the goal along with a header but only 17 and making a second appearance for the Three Lions, he still has plenty of time to develop.

It was to be a fellow Football League graduate that would keep the five-goal record alive for England though, as Watkins slotted home on debut seven minutes from the end.

Good work on the left-wing by Lingard followed link-up play between Foden and Watkins to allow the front man to create some space in the area and fire a shot into the bottom right corner of the net – nothing that Benedettini could do about that one.

A bland last five minutes saw Chilwell have a soft penalty claim dismissed by the referee, but the result was never in doubt and the full-time whistle rang out at 5-0.

What does the result do for England?

It gives them a good start in their qualification battle for the 2022 Qatar World Cup. Only the first-placed team in the group will automatically go through to the competition finals, and Southgate’s side are top of Group I with the Matchday 1 victory.

England have only ever failed to qualify for the World Cup finals on three occasions – 1974 (West Germany), 1978 (Argentina) and 1994 (United States).

The Three Lions travel to Albania on Sunday before welcoming Poland to Wembley on Wednesday. These two fixtures will be the final two competitive games played before the delayed 2020 European Championship tournament takes place this summer.

Interestingly, Southgate said pre-match that he already knows his starting 11 for the Euros, so it may well be a case of trying to make it into the 23-man squad for some of the national team’s fringe players.