The names tied to Steve McLaren’s succession as England manager are flocking, both in the British press as well as abroad. The job divides opinion: some consider it one of the top international posts, while others see it as a poisoned chalice, but either way the English FA should be making a decision within the next week. So meanwhile while we wait, let’s have a look at the potential candidates.
. 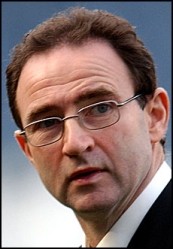 After McLaren’s eviction from the coaching hotseat, the Football Association had identified the Aston Villa coach as the ideal replacement for Steve McLaren. FA chief executive Brian Barwick considered O’Neill as one of his top targets, and the Villa boss had emerged as one of the top choices for fans and the bookies’ favourite on a day of intense speculation. O’Neill had already been approached by the FA in 2006 (around the period when the job was given to McLaren), but some of the FA members had expressed their distaste for the Irishman at the time, allowing Villa to snatch the manager and making a good deal in the process (Villa is currently 8th in the EPL rankings).

However, O’Neill has recently declared he was not interested in the England job, claiming he would prefer to finish the job started at Villa Park. “I know where the speculation has arisen from because I was involved in the interview process the last time“, said O’Neill. “I was not a club manager at the time, and if that opportunity had arisen and I had been given that chance that would have been a different matter. But I am here now and I’m committed to Aston Villa football club. This is what I want to do. I want to do this job, I’ve started it and I want to drive it forward“.
.

Another fan-favorite and top pick of the English FA, but alas the Portuguese “Special One” already pointed out he was not interested in the gig. Mourinho has been out of football since leaving Stamford Bridge in September, but is believed to be waiting for a big club rather than a national post. In addition, those close to Mourinho seem to indicate that if the manager had to pick a national team, he’d be only interested in coaching Portugal. Nevertheless, Mourinho remains a favorite for the fans, the FA, and also the players (John Terry in particular).
.

In the end, the most likely winner of the “race-to-the-England-bench” might be a foreigner, the only one so far who declared he’d be interested and available. “The challenge of coaching a national side like England would be something different. The job is not about coaching every day” said Capello to the BBC, confirming the previous declarations he’d made during the Italy-Faroe Islands commentary. He added: “It would be a very difficult challenge but a very exciting one“. According to Italian newspaper Gazzetta della Sport, Capello is scheduled to travel to London over the week-end. Coincidence?
.

Unlikely. According to his declarations in Gazzetta dello Sport‘s videochat, the Italian World Cup champion said “I like the Premier League, but I don’t speak English. That, for my approach to see and live football is a big handicap. I could be a national coach again, but never France and if I had to choose, I prefer Spain over England“. If you’re not convinced, Lippi just refused the seat of Birmingham City
.
. 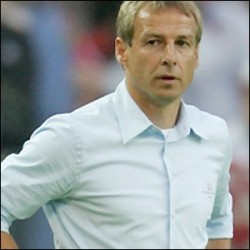 Meanwhile according to the BBC, Franz Beckenbauer has urged the FA to appoint former Germany boss Jürgen Klinsmann, and believes the ex-Tottenham striker would not be afraid to shake things up within the England set-up: “The job would be ideal for him and England as well“, Beckenbauer said. “Jurgen has very clear ideas who can enforce them. He knows what he wants, he speaks very good English and would revel in the England job. (…) He is looking for a role in a country with a great tradition and appetite for football. As a man with a clear vision, he knows how to implement that vision even against resistance: I could well imagine England getting a fresh start with him. He speaks the language, has a great reputation there thanks to his time at Tottenham and was even footballer of the year.”

Klinsmann took charge of Germany after they were again humiliated at Euro 2004 with a first-round exit. He revamped and modernised the German FA (DFB), leading Germany to a surprising third place at the 2006 World Cup. A potential problem could be however, that the English FA might not allow the same leeway the DFB gave Klinsmann, as he was coaching Germany. The German coach resisted pressure to abandon his home in southern California, watching matches on television and communicating with players via phone and email, a rather unpractical arrangement. Most members of Germany’s football establishment accepted Klinsmann’s commuting, but criticism of the ex-Tottenham striker’s approach invariably emerged when the German team performed poorly in the run-up to the 2006 World Cup.

Manchester City’s German midfielder Dietmar Hamann questioned whether the English public would accept Klinsmann as their new coach. “Would the English people like a German to be in charge of their national team? It is an interesting one.”
.

Another fan-favorite, and past England football legend, Alan Shearer was said to be stunned to be reported as a candidate for the England hotseat. “I am surprised as anyone to see my name up there” Shearer said to The Sun. “I think there are many more candidates above me with a lot more experience than I have. I’ve taken my coaching badges and my A and B licences and management does interest me at some stage. But when that is don’t know. Right now I’m happy with what I am doing as a pundit for the BBC“.
.

Laugh all you want, but the recent tensions between Benitez and Liverpool’s American bosses Gillet / Hicks could drive the Spanish coach away from Anfield. “Maybe I could be Steve McClaren’s replacement if I improve my English” said the 47-year-old Spaniard to the BBC. “I was being serious. You never know what can happen in the future“.

.
.
That’s the end of our list. Other candidates I didn’t mention include Harry Redknapp, Guud Hiddink, Luiz Felipe Scolari, and Mark Hughes: I believe these have an even lower chance of getting the job, but if you’re interested in read.ing more, see the BBC list.

.
Right now, my money is on Fabio Capello. If I were the English FA I’d jump on the occasion this instant: the man is a bit arrogant (but in no way to the extent of José Mourinho), plays defensive football which might not please the English fans too much, but more importantly he can win, win, win! Capello is a winner and a tactical mastermind, one of the most respected managers of Italian football. Wherever he’s gone, be it the golden years of AC Milan, or Real Madrid, AS Roma, or Juventus, he’s collected boatloads of trophies.

In football, you can complain all you want that your team isn’t playing spectacularly or that you’re winning every match by 1-0, but all that matters in the ends are results: I am sure the English fans would be ready to forgive Capello if he takes them to a World Cup victory (not that I see that happening anytime soon, but who knows…). If the ex-Real Madrid coach is truly interested in managing England, the FA would be fools to pass this opportunity up, despite the fact that he’s a foreign manager.

Meanwhile, the ink is still flowing on now-sacked Steve McLaren, especially due to Macca’s refusal to resign after being knocked out of Euro 2008 contention, thereby obtaining a cushy â‚¤2.5m compensation from the English FA for terminating his contract. The Daily Mail titled “Why Should He Get A Penny“ in their print edition and included a photo of McLaren & wife ready to depart to the Caribbean, where the couple just recently purchased a house. Not much worse than the Daily Express to be honest, which reported that a train driver of the London Underground (or subway if you prefer) spoke the following message on the train intercom, to explain the lateness of his convoy: “I apologize for the delay, but we are receiving reports that a man may be blocking the rails in front of the head carriage. We are hoping it is Steve McLaren“.