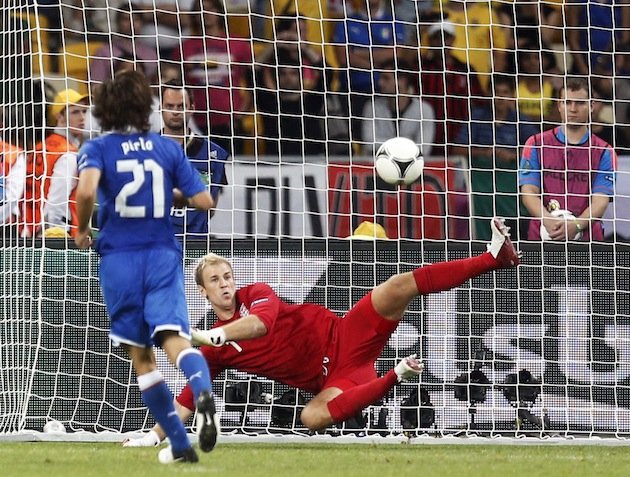 England players and fans have been subjected to penalty heartache once more, as the Three Lions were eliminated from Euro 2012 on spot-kicks by Italy on Sunday night. After no goals in 120 minutes of play the game was decided from 12 yards, as Ashley Young and Ashley Cole missed their efforts to send the Azzurri through. Here is the news Soccerlens has been considering today.

Italy progress to semi-finals with penalties win over England

The fourth and final quarter-final of Euro 2012 was expected to be the closest and most evenly-matched game of the round, as two predominantly defensive sides met on Sunday night. This proved to be the case, as a 0-0 draw after normal and extra-time resulted in spot-kicks, with Cesare Prandelli’s men winning 4-2. 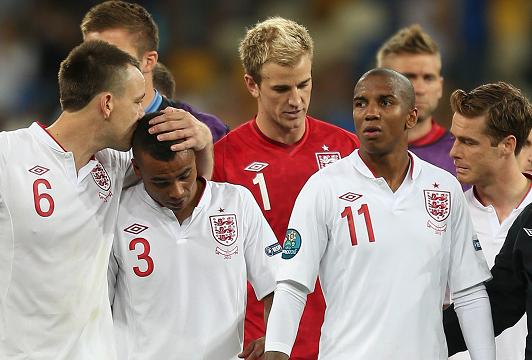 Roy Hodgson stuck with the same starting XI that had beaten Ukraine 1-0, resisting the urge to use Arsenal’s attacking duo Theo Walcott or Alex Oxlade-Chamberlain from the start, whilst the Azzurri welcomed attacking midfielder Ricardo Montolivo into their side in a customised 4-4-2 formation.

The first-half started well, with both sides having opportunities to break the deadlock and the game not the tactical battle of wills that was maybe predicted ahead of kick-off. A swerving Daniele De Rossi effort from distance beat Joe Hart in the England goal only for the Roma man to be denied by the upright, whilst Glen Johnson found himself in space in the Italian box only to be thwarted by Gianluigi Buffon.

As the first-half went on the English defence looked at sixes and sevens, with a number of attempts to play offside mis-timed but not punished. Last-gasp defending and a lack of clinicalness from Mario Balotelli kept the game scoreless as the game went into the interval.

Andrea Pirlo started to take more of a grasp of the game in the second 45, and as such the Azzurri had the bulk of possession as England started to backpedal. Even the introduction of Walcott and Andy Carroll could not counteract dominant Italian possession and territory, as Prandelli’s men looked to get a winner.

Despite Italy’s dominance a winner could not be found, and the game went to extra-time. 30 minutes of English rearguard action prevented the Azzurri from winning the game, as Hodgson’s charges looked tired and playing for penalties. Italian substitutes Alessandro Diamanti and Antonio Nocerino came closest, with the attacker hitting the post and the AC Milan midfielder having a goal chalked off for offside.

Nerves were jangling as the penalty shoot-out commenced, but Balotelli and Steven Gerrard both coolly slotted home before Montolivo shot wide to give England the initiative. Wayne Rooney put them ahead, before Pirlo showed his ability with a masterful clipped ball down the middle to keep Italy in it. Ashley Young was next up, but his effort reverberated off the crossbar, allowing Nocerino to even things up. Ashley Cole’s lack of conviction saw Buffon make a save, with Diamanti there to score the winning kick.

Hodgson has stated that his players can leave the tournament with their heads held high, and the side exit Ukraine and Poland without suffering defeat. That said, Italy were deserved winners of the clash, as England showed very little attacking threat after half-time, and had Balotelli had his shooting boots on the Azzurri could have commanded a comfortable victory.

Losing on penalties is certainly a cruel manner of defeat, but in the end England cannot have any real qualms about their exit, as they were second best to a technically-superior Italy side. Prandelli’s inclusion of Montolivo to add guile and creativity to his side was an attacking move, whilst Hodgson’s persistence with James Milner and defensive outlook blunted the efforts of the likes of Rooney and Danny Welbeck.

Pirlo was the deserved man-of-the-match, and as such is a classic example of the difference between the two sides. The Juventus man controlled the game from deep with sublime passes and assurance on the ball. Contrast this to the approach of Gerrard and Scott Parker in the centre of the park for England, who were determined but wasteful, and it shows the difference in class between the sides. England lacked a player to dominate their possession game, and as such Italy had the bulk of the ball and were the better team.

Italy progress to the last four to take on highly-fancied Germany, and the nation’s fans will be encouraged by a more comprehensive and complete display than was on show in their three Group C matches. The Azzurri will need to persist with their attacking outlook and take their chances against Joachim Low’s men if they are to stand a chance, but Italy will provide a more fitting opponent to the Germans than England would have with their limited ambition and defensive outlook.

Andre Pirlo’s impact on the game between Italy and England is analysed by The Guardian, who pinpoint the tactical mismatches that allowed the Juventus man to orchestrate play.

The Telegraph state that England’s lack of attacking threat means that the Azzurri were worthy of their penalties victory, as Italy had 23 shots on goal to the Three Lions’ six.

Lahm hits out a ‘disgraceful’ mole

Germany’s team selection has been leaked to the media in the build-up to recent games, and the side’s captain Phillipp Lahm has branded the person revealing the news as a disgrace.

The fact that Portugal have had two more days rest than Spain ahead of Wednesday’s semi-final clash between the teams has been pointed out by La Roja phsyio Javier Minano, who feels this gives Paulo Bento’s men an advantage.

Samir Nasri’s international future is up in the air after France boss Laurent Blanc criticised the playmaker for his dust-up with a journalist after Les Bleus’ Euro 2012 exit at the hands of Spain.

With four teams doing battle on Wednesday and Thursday for a place in the Euro 2012 final, come back every day this week as Soccerlens looks at the potential candidates for glory from Ukraine and Poland.