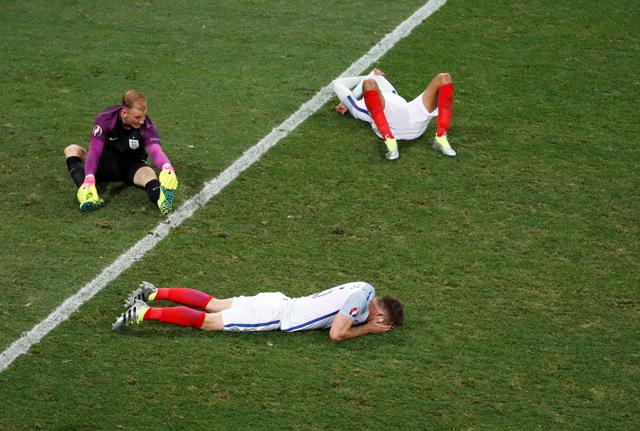 The warning signs were there. Conceding an injury-time equaliser to Russia, the worst team at Euro 2016, meant that Roy Hodgson’s England started the competition in France with a draw. A late, late win over Wales briefly gave the nation hope before a dour 0-0 draw with Slovakia brought everything crashing back down, with the Three Lions progressing in second place behind Wales who enjoyed a group stage win in their first major international tournament since the 1958 World Cup.

Iceland lay ahead in the last 16. Lowly Iceland, with a population the size of Leicester, who were smashed 6-1 in the last meeting between the two sides in 2004. Gylfi Sigurdsson and Eidur Gudjohnson are the two most (and for some only) recognisable players in the Iceland team, who are now at 33/1 with William Hill to win the tournament outright, having beaten England 2-1 at the Allianz Riviera in Nice on Monday.

Hodgson, who took over from Fabio Capello in 2012, resigned in the aftermath as chaos engulfed a nation already reeling from the shock ‘Brexit’ results in the recent referendum. The 68-year-old seemed unable to pick his best team, instil a winning mentality and make decisive substitutions when necessary.

With Premier League top scorer Harry Kane on corners during the tournament, Wayne Rooney floundering in midfield ahead of the vibrant Ross Barkley, Daniel Sturridge and Jamie Vardy being deployed on the wings, the versatile James Milner unused and the out-of-form Raheem Sterling perennially trusted to start matches; its little wonder Hodgson’s goose was cooked after what was an appalling evening in Nice.

Wales, on the other hand, overcame Northern Ireland 1-0 in their own last 16 tie, and look forward to facing Belgium later today. Marc Wilmots’ side are 4/1 to win Euro 2016 with William Hill, with Wales a rather interesting 25/1. Chris Coleman’s men are seriously pulling up trees in France, with Real Madrid superstar Gareth Bale the joint top scorer at the tournament with three goals.

The 26-year-old is 6/1 to win the golden boot in France, third favourite behind with his Madrid teammate Cristiano Ronaldo. France attacker Antoine Griezmann is at 5/2.

Despite crashing out on Monday, the future still looks bright for England. Harry Kane is only 22 and, despite having an awful tournament, is clearly the future of the England front line after brilliant successive seasons with Tottenham in the Premier League. His club teammate Dele Alli, at 20, is a future star in the making. Tough yet intelligent, strong yet agile; Ali is English football’s brightest spark, with the number ten role surely his in future tournaments to come.

The future of Wayne Rooney is not as secure, with the current England captain failing to make his make any real impact on the tournament. The Manchester United man looked out-of-place in midfield, making poor decisions and playing ill-conceived passes throughout the 90.

Eric Dier of Tottenham looks a real find in the defensive midfield role, however, while Kyle Walker looks certain to be the England right-back for years to come.

It must be said that every one of the aforementioned players performed badly in the defeat against Iceland, of that there can be no doubt, but there was promise in their individual performances across the tournament.

Every England player will be watching the rest of the tournament on TV with France currently favourites to collect the trophy on home soil. Didier Deschamps’ side are at 11/4 to win their third European Championship, having won in both 1984 and 2000.

They will have to overcome the mighty Iceland first on Sunday in Paris, however, with the smallest nation to ever qualify for a European Championship finals still going strong!