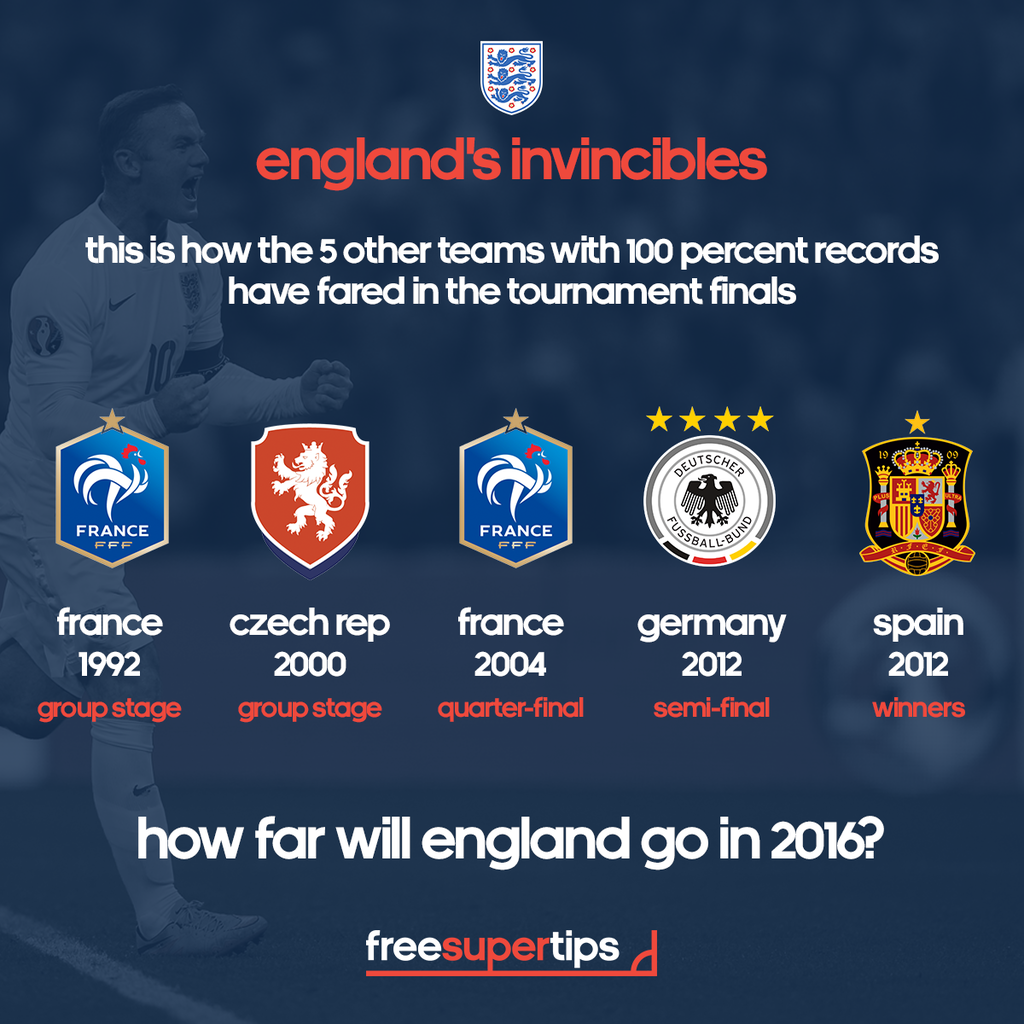 No other national team in the Euro 2016 qualifiers mirrored the Three Lions’ feat; Austria and Spain came close but they weren’t as perfect as the English. What it means for Roy Hodgson’s men is the big question now; can England pull off their first European Championship win next summer? or will they tread their similar underwhelming course at a major international tournament?

History offers little pointers to what England can bring to the table next summer in France. They certainly are not the favourites, as holders Spain, world champions Germany and hosts France will likely be the best bets. Teams qualifying with 100 percent records in the past haven’t fared consistently well.

Of the teams that entered the European Championship finals with 100 percent records, only Spain in 2012 went on to win the entire thing. Germany, who were the other nation with a 100 percent qualifying record heading into Euro 2012, faltered in the semi-finals.

There have twice been group stage casualties, for France in 1992 and the Czech Republic in 2000, instances which will be reminders to England that a perfect qualification campaign means nothing in the finals. In Euro 2004, France again entered the tournament winning all their qualification matches only to be knocked out in the quarter-finals by Spain.

The obvious caveat is to not get carried away by wins in the qualifiers against teams whose average Fifa ranking is 91, including a San Marino side that is ranked 196th in the world, and is the second worst Uefa member nation. There will be plenty drum beatings ahead of next summer’s big event talking up England’s perfect qualification campaign, but the fact that qualification campaigns fade into irrelevance when the tournament proper gets under way is the one to consider.

Judging solely by history, a perfect qualification campaign will, on average, take you as far as the quarter-finals, which is exactly where the Three Lions finished in their previous two European Championships, in 2012 and 2004. Whether the habit of winning consistently gets ingrained into the English players remains to be seen; November’s scheduled friendlies against Spain and France will be good barometers.

Winning is a good habit, and England certainly made winning a habit in the just-concluded European qualifiers. But a perfect qualification campaign translating into the finals is a rare phenomenon, as proved by history. Form book is a term not usually associated with international football, and England will certainly not count on their form book heading into next year’s finals.

The Three Lions’ best return at the Euros was reaching the semi-finals in 1968 and 1996. The perennial underachievers, England now have for themselves a perfect record which isn’t commonplace. Very few teams have done what England have managed to do, and while the record can only be a positive achievement to look back upon, the burden it brings along could be too heavy to carry.

Too heavy only if the players allow it to become. The recent successes of Spain are good examples of how to banish past demons, and with their perfect record behind them, England can not do a lot worse than not use it to motivate themselves.