India
Home News england be careful what you wish for 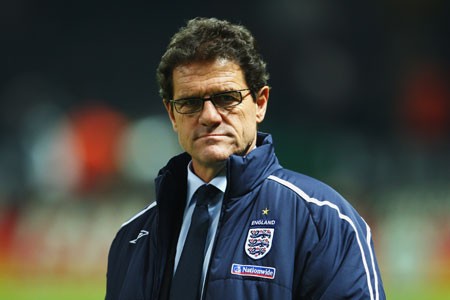 Preparations for the Euro 2012 Championships can begin as a 2-2 draw against Montenegro sent England through as group winners for this summer’s tournament. Yet Fabio Capello still remains a figure most people can’t wait to see the back of.

At club level Capello is a well respected manager, his club careeer has seen him lead teams out at the Stadio Olmpico, the Giuseppe Meazza and the Santiago Bernabeu. When the confident Italian strolled into the England job in December 2007 he took a Three Lions team in tatters. Under his stewardship, England has once again become a respected international team and more importantly have re-learnt the art of qualifying for major tournaments.

The tide turned against the Italian after England’s 2010 World Cup campaign, failed to live up to the hype generated by the red tops and the overly optimistic. The Three Lions returned home after a defeat to rivals Germany, but they still progressed further than reigning champions Italy, Cristiano Ronaldo’s Portugal and France, the 2006 runners up.

England were put to the sword 4-1, by a youthful and free flowing German team in the second round. This defeat, however, owed more to the Germans excellent counter attacking and a bad refereeing decision, than any tactical error by the Italian. The Germans would go on to crush Leo Messi’s Argentina, then lose a tight semi-final, 1-0 to the eventual champions Spain and before winning the third and fourth place play-off. There was no shame to be had by being outclassed by a true top quality team.

Capello has been a top appointment for the national team; he boasts and incredible record as England manager and has guided his team to 4th place in the FIFA World Rankings, above luminaries such as Brazil, Italy andArgentina. During his tenure players such as Ashley Young and Joe Hart have become leading world players in their positions and the progress of Jack Wilshere, Scott Parker and Darren Bent into international players as owes much to Capello’s faith in them, as that of their club managers.

The Italian has also had to deal with the passing of England’s Golden Generation. The nation’s hopes once rested upon David Beckham, Sol Campbell, Michael Owen, Steven Gerrard and Frank Lampard, players who failed to break the 50 plus years of hurt. Capello took over a team in transition, both Gerrard and Lampard are still around the squad, but a major overhaul was needed. The Italian has freshened up the England team without compromising England’s participation at a major tournament, the point secured in a hostile Podgorica stadium is testament to Capello’s progress.

However, once Euro 2012 is over, Capello will walk away and leave the most coveted job in English football up for grabs. It is a job that many would like but few have the talent to have.

The media’s favourite seems to be current Tottenham boss, Harry Redknapp, but does he possess the ability to step up to international football?

At Spurs he has stabilized a team that was in free-fall and once again brought attractive football to White Hart Lane, but he has proved on many occasions that he lacks the tactical finesse to take Spurs anywhere above 4th.

It took most Spurs fans and pundits one glimpse of the team sheet to realise that despite Scott Parker’s valiant efforts, Spurs would lose the game if they didn’t strengthen centre midfield. It took Redknapp 70 minutes to realise this, finally when he did choose to introduce Sandro, Spurs won the game.

This style of football against an organised international team, capable of retaining possesin for long periods, would be nullified and painfully exposed. Redknapp has built his success at Spurs on the back of a flying winger and a fantastic creative midfielder, both of whom, unfortunately are not English.

During his reign as Tottenham manager, the Lillywhites have been continually caught out by “lesser” teams. Redknapp seems unable to think on his feet and change his team’s style of play when they need it the most. In terms of tactical awarness and finesse he is a long way from Luiz Felipe Scolari, Marcello Lippi and Vicente Del Bosque, the last three World Cup winning managers.

The media and public perception of Redknapp is that he is great motivator, however, at Spurs he has allowed players to leave, who have prospered under different managers. The prime examples are England striker Darren Bent, Adel Taarabt and AC Milan midfielder Kevin Prince Boateng. Recent quotes from Redknapp seem to suggest that a confrontation is now brewing with talented Dutch player Rafa Van der Vaart.

If the FA decides not to turn to Redknapp, a serious problem faces them as there is no other viable English option. In the Premier League, the only English managers currently in a job are Alan Pardew, Neil Warnock, Steve Bruce and Roy Hodgson, all of whom if appointed would send a shudder down any Three Lions fan’s spine.

England doesn’t boast world class managers, the most successful teams of the last 20 years have been managed by Scots, Portuguese, French or Italian managers. Capello over the last 5 years has managed to progress a national pool of players devoid of the technical class that Spain,Germany and Holland have by the bucket load. The achievements of Capello should be well remembered, England has been in this situation before.

When the FA waved goodbye to Swede Sven Goran Eriksson, after losing a penalty shoot out with only 10 men against Portugal in the quarter finals of the 2006 World Cup, the fans and media alike were delirious.

In stepped Englishman Mclaren and England slipped off the international radar for one summer in 2008.

With Capello set to depart after 2012 the mantra:  “Be careful what you wish for” should be whispered softly into the ears of every single England fan counting down to the Italians departure.