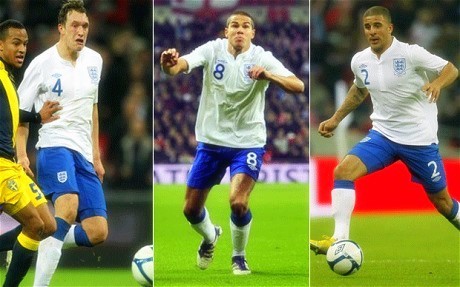 Gareth Barry’s deflected header gave England their second win in three days as the Three Lions beat Sweden 1-0. Barry’s goal on 20 minutes was the country’s 2,000th goal and the only goal of this game as Fabio Capello’s men cruised to victory at Wembley.

England won in front of a record low crowd of 48,876 since the stadium was rebuilt, and never really left second gear as Sweden lost to the hosts for the first time in 40 years.

The Three Lions were comfortable in the first half, and the first clear chance came on 17 minutes, when Kyle Walker and Theo Walcott combined well on the right hand side. Walcott played a one two with Bobby Zamora in the penalty area, and he then headed the ball back to Zamora who slid the ball into the side netting from four yards out.

The goal came shortly after, this time the move started from the left hand side. While Sweden were down to ten men as Pontus Wernbloom received treatment for a bloody nose, Leighton Baines found Stewart Downing who moved the ball onto his favoured left foot and put in a delightful ball for Gareth Barry whose header was touched into the net by Daniel Majstorovic.

England fell flat after the goal, and the visitors almost equalised in bizarre circumstances. David Elm’s right footed corner curled menacingly, and Joe Hart made a crucial save to palm the ball away from under the cross-bar. Two minutes later Johan Elmander was booked for dissent after Kim Kallstrom was adjudged to have fouled Rodwell when it looked like the Swede had taken the ball cleanly.

Phil Jones should’ve made it 2-0 on 39 minutes. The Manchester United man picked the ball up in midfield and marauded through the Swedish midfield, and his excellent run resulted in a one-one which the 19 year old flicked wide with the outside of his boot from just inside the penalty area.

Another golden chance was missed just before the break. England were patient in their build up, Walker and Walcott combined well again on the right hand side, and the Arsenal man eventually switched the ball to the left hand side where Downing glided past Mikael Lustig, and his teasing cross was headed by Jack Rodwell, but the Everton man could only head the ball against the outside of the post from five yards out.

England made one half time change, Joe Hart was replaced by Scott Carson. It was the Bursaspor ‘keeper’s first appearance since 2008 for England. The anonymous Zlatan Ibrahimovich was replaced by Ola Toivonen at the break as well. The second half started much the same as the first. Straight from the off, England looked lively. Downing stood up a cross and Zamora flicked the ball on at the far post. Rodwell burst forward to meet Zamora’s touch with a venomous volley which was well blocked.

James Milner was the next to enter the fray on 58 minutes coming on for the energetic Rodwell, as part of a double change which saw Daniel Sturridge win his first full England cap coming on for the impressive Walcott. Sturridge was involved immediately, and could have had a penalty when Wernbloom held back the Chelsea forward just inside the penalty area.

Zamora had another chance to double the advantage, after Downing again provided a beautiful cross, but Zamora’s effort from close range was deflected away for yet another corner for the hosts. Downing came close two minutes later. The Liverpool winger picked the ball up on the half way and dribbled his way through the Swedish midfield and forced the visitor’s goalkeeper Andreas Isaksson into a save low to his left.

After a solid performance, Zamora made way for Darren Bent on 69 minutes. The Fulham striker did himself no harm as he had a solid game to emphasise himself in Capello’s European plans.

Sweden were disappointing throughout. The Scandinavians scored 31 goals in ten qualifying encounters, and offered little in the second half until Sebastian Larsson’s cross looped towards goal 12 minutes from time. The cross was heading in yet Carson parried away to safety. That was Carson’s only save as the Swedes failed to offer any real threat in front of goal.

Darren Bent could have made it two after Milner’s delivery was touched away by Larsson just as the Aston Villa striker was ready to head home. Yet the second goal was not needed as England comfortably protected their lead to end the year on a high and end 2011 undefeated.