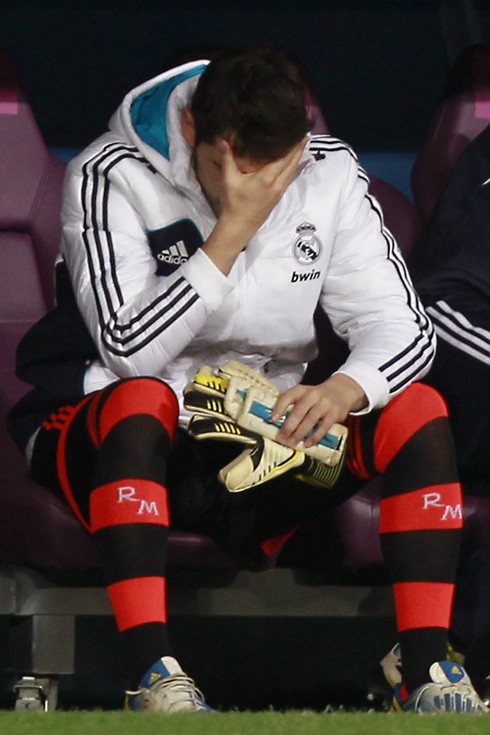 As Iker Casillas was substituted last night due to a rib injury, it was as if fate was against the captain. He had been sidelined last season and so far this season as well, and the one chance he had to stake a claim for a starting spot resulted in his injury.

But the vultures had already been circling before the Galatasaray game. While Casillas can be expected to be fully focused on recovering from his injury and fighting for his place in the starting XI, the question some were asking before the game stays loud and clear – ‘Is This The End Of Iker Casillas at Madrid?’

During the 2012-13 season, when Diego Lopez temporarily replaced Iker Casillas  in goal following an injury to the latter, no one (probably not even Lopez himself) thought that he would even stake a claim to permanently replace him. Even though Lopez put in a string of impressive performances, Casillas was expected to come right back into the starting XI after being declared fit. But that never happened.

Lopez retained his place, and unbelievably, almost criminally according to most  fans, Jose Mourinho benched a fully-fit Casillas. Not once, not twice, but throughout the course of the season, the Spanish No.1 remained in Lopez’s shadow. The fans were outraged, and the footballing world as a whole was in shock looking at one of the best goalkeepers in the history of the game spending more time on the bench rather than on the pitch of the Santiago Bernabeu.

But no one even contemplated that this could be the end of Iker Casillas at Madrid.

The summer of 2013 saw a change in management at Madrid with the arrival of Carlo Ancelotti. If Casillas thought that his nightmare was over with Mourinho’s departure, he was wrong. Ancelotti too, has seen fit to start with Lopez in all the La Liga games thus far. In a recent interview, the Italian stated that he only plans to play Casillas in the Champions League this season, with Lopez featuring in La Liga.

The word Iker Casillas is almost synonymous with Real Madrid. So, asking the question ‘Is This The End Of Iker Casillas at Madrid’ is almost like asking ‘Is This The End of Real Madrid?’. San Iker (translating to Saint Iker), as he is fondly called by the Madrid fans, Casillas has been with the club since 1990, when he was just 9 years old. With The Whites, he has won 5 La Liga titles, 2 Champions League titles and 1 Spanish Cup till date. He has seen it all – from the glory days of the Galacticos, to the relatively barren periods of Bernd Schuster and Juande Ramos, to another rise in power since the turn of the decade.

He also led Spain to three successive triumphs in big tournaments – Euro 2008, the FIFA World Cup in 2010 and Euro 2012. No wonder is he held in the highest esteem by not only the Los Blancos supporters, but also by almost every football fan in Spain.

Even though the end of Iker Casillas at Madrid may prove to be great for their rivals in a footballing sense, it will be something everyone will be sad to see.

There is no doubt that he is too good a keeper to ply his trade on the substitutes’ bench. At 32, he is entering the final phase in his career. If he were to be up for sale, there is sure to be a long line of clubs trying to get his signature. Several talks of a transfer in the January transfer market have been floating around, and clubs like Arsenal and Manchester City have been mentioned.

There is not doubt that though Casillas is and will always be Madrid through and through, assurance of regular playing time may prise him away from the Bernabeu. Ancelotti has said that he wants Casillas to stay, but the record appearance-maker for Spain will be deep in thought about whether or not he should continue second fiddle to Diego Lopez.

Do you think Iker Casillas will leave Madrid?