On the 10th of June 2006 England played their opening World Cup game against Paraguay. And nobody liked him. On the 1st of July 2006 England lost to Portugal on penalties and were eliminated from the tournament. And everybody loved him.

England’s star of that tournament started off as the inclusion in Sven-Goran Erikkson’s squad that people loved to hate. His name was, and still is, Owen Hargreaves. The central midfielder proved to be the key man in the England squad by the end of the tournament. His form being so impressive that Sir Alex Ferguson delved deep into his pockets to prize the English-German-Canadian midfielder from Bayern Munich. His successor to the mantle of zero to hero? Emile Heskey.

The Aston Villa striker has not been impressive over the course of this season leading to many pundits suggesting that England should play a 4-4-1-1 system with Steven Gerrard playing off Wayne Rooney from the start of the tournament (England play USA on June 12). These pundits however do not see the tactical advantage that Emile Heskey brings to the England team when playing in the latter stages of the tournament. The very best defenders these days can deal with lightning pace and devilish trickery, however, brute strength and the ability to stick your rear out are two qualities that defenders in the modern age have forgotten how to deal with.

With Heskey in the team Rooney has the freedom of South Africa, he can make his marauding runs to right back to retrieve the ball knowing that, when he gets there, he will have a target to aim a delicious long ball at. Heskey scares defenders, and it is not due to any great ability on his part is purely the fact that they don’t know how to contain him. Pundits cite the fact that Heskey is not a proven goal scorer, but does he even need to be? England’s best attacking display in recent years came in Zagreb and Heskey had a hand in all of the goals. His excellent positioning allowed the space for Walcott to penetrate and his ability to keep possession will be crucial in the biggest of big games.

When on the attack he pushes the back line of the opposition closer to goal, allowing England’s midfield added time on the ball, giving them the chance to create a goal-scoring opportunity. The triumvirate of Rooney, Gerrard and Lennon/Cole at this summer’s World Cup will be aided by the presence of Heskey when heading towards the opposition’s goal. 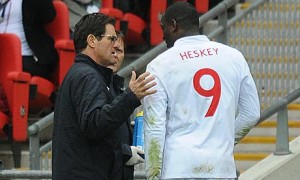 Defensively, Heskey is also of great benefit. Not only does Heskey’s positioning allow Rooney to go on those mad runs into defence, but his overall fitness and mobility allows England to press the ball at a greater velocity than if the languid Crouch or the uninterested Defoe leading the line. Retrieving the ball can be the key to a World Cup match and, well, if pressing works for Barcelona surely it will do for England. As Chelsea fans will bear testament, having a powerful striker can also be an advantage when defending set pieces. I’m sure Georgio Chiellini and Per Mertersacker would rather be marked by Jermaine Defoe than Emile Heskey when attempting to score from a corner.

The debate goes on and the man whose opinion really matters happens to look like the depiction of Mel B off Bo Selecta. Oh well Fabio, you can’t have it all.