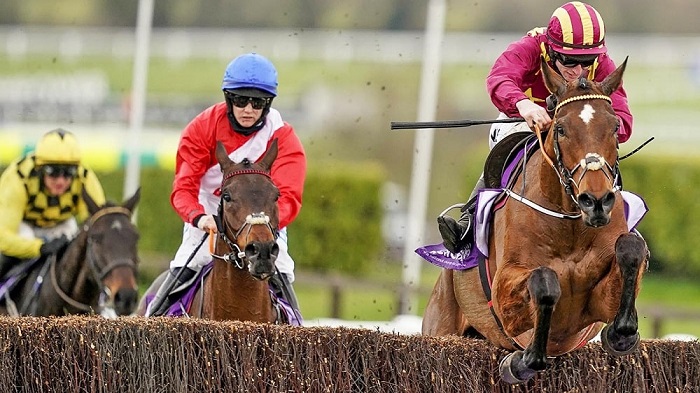 In a red-hot renewal of the race formerly known as the JNwine Champion Chase, past Down Royal races probably won’t help punters using horse racing betting sites to find the winner. This right-handed and undulating track suits galloping steeplechasers, and some of the best in training run here.

Previous Down Royal results indicate that race-fit horses may have an advantage. Five of the last eight Down Royal Champion Chase winners had a run within a month before coming here. It is possible to land the spoils fresh, however. Favourites have a reasonable record with three justifying their place at the head of the betting in the last eight years. Two horses won at double figure odds in that same timeframe, however.

It’s also essential that horses are proven over the trip. All recent winners of the Down Royal Champion Chase had at least one success over 3m on their CV. This promises to be a real autumn highlight, so read on for Down Royal tips on their feature contest.

Why Minella Indo odds make him favourite at Down Royal

A Cheltenham Gold Cup winner like Minella Indo is of obvious interest wherever he runs. Trained by Henry De Bromhead for Barry Maloney, this eight-year-old Beat Hollow gelding farmed a couple of easy races around this time last year. He has since taken his form to a whole new level over fences. Previously a gallant runner-up to Champ in the 2020 RSA Chase as a novice, there were some doubts whether he could cut it at the highest level in this sphere.

Minella Indo fell in the Savills Chase at Leopardstown last Christmas, and it was too early to say what may have happened. He was then only fourth in the Irish Gold Cup at the Dublin Racing Festival, but relished the extra quarter-of-a-mile at Cheltenham. Minella Indo stayed on up the famous hill and held stable companion A Plus Tard by just over a length. A star was born with Jack Kennedy on board for the first time.

He doesn’t keep the ride, however, as he is stable jockey to Gordon Elliott, who saddles most of the opposition. Minella Indo has a good record fresh and Rachael Blackmore is back aboard. On official ratings, he has 8lb and upwards in hand on the field here. It’s therefore no surprise that Minella Indo odds make him the 5/6 favourite with William Hill for the Down Royal Champion Chase as he’s the one to beat.

Back Minella Indo with William Hill

Frodon has been jumping fences since he was a three-year-old in France. He now drops back in trip for his first start in the Emerald Isle. Trained by Paul Nicholls, who has won the Down Royal Champion Chase four times before, this popular horse also goes well fresh. Bryony Frost maintains the partnership with Frodon here too. Now a nine-year-old, the son of Nickname found his stamina stretched in the Gold Cup.

As Frodon faded into fifth at Cheltenham, he clearly didn’t get the trip. However, three miles is a different proposition and his record going right-handed reads well. Frodon and Frost’s finest hour came in the King George VI Chase at Kempton on Boxing Day. The pair led the field a merry dance out in front under a superbly judged ride.

All of the old ability remains there with Frodon too. Despite a hard race at Cheltenham, he rallied superbly when headed to win the Grade 2 Oaksey Chase over 2m 6f at Sandown on his last start. Nicholls has often supported this race with runners, but last won it in 2012. Frodon is the only horse within 12lb of Minella Indo on official ratings here, though, so should give him most to think about at 9/2 with Betfred.

Bet on Frodon with Betfred

Galvin may be best of Elliott Down Royal Champion Chase trio

The three other horses that Down Royal tips must consider all hail from Cullentra House. Elliott has trained four winners of the old JNwine Champion Chase in the last eight years. That fine recent record means his trio are no forlorn hopes. Top rated of those is Delta Work, but he’s had little luck at Down Royal Racecourse over the years. He is the sole course winner in the line-up, but that doesn’t tell the full story.

An eight-year-old Network gelding, Delta Work has flopped at Down Royal races in this event during each of the last two seasons. Sent off at 2/1 and 3/1 respectively, he didn’t make the frame on either occasion. In other words, Delta Work needs this run to strip fitter. He is also on the comeback trail after three uninspiring efforts last season.

Ravenhill is an 11-year-old, meanwhile. The winner of the 2020 National Hunt Chase couldn’t land a blow in last year’s Down Royal Champion Chase either. He has most to find on official figures too, so Ravenhill makes little appeal. By process of elimination, then, Galvin is race-fit and still on the up. The seven-year-old has most going for him of Elliott’s three-pronged attack.

Galvin has won his last six outings and needed every yard of the Grade 3 Irish Daily Star Chase at Punchestown on reappearance. It was a good performance as he gave weight and a beating to two Willie Mullins mounts. That race has been a stepping stone to Down Royal races before, so Galvin could be a play against the top two in the betting at 4/1 with Bet365 here.

Bet on Galvin with Bet365