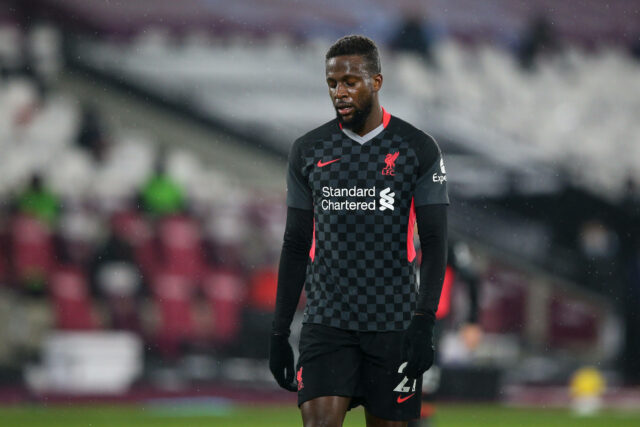 Divock Origi came off the bench for Liverpool in Wednesday’s 2-0 win over Atletico Madrid, but the 26-year-old has an uncertain future at Anfield due to a lack of playing time.

Origi isn’t commanding a starting place after falling down the pecking order under Jurgen Klopp, so this could be the end of his seven-year stint on Merseyside.

The £10.8m-rated Belgian international joined Liverpool from LOSC Lille in 2014 and has gone on to make 163 appearances in all competitions, scoring 37 goals with 16 assists. Origi has played in a lot of games, but 60% of them have come from the bench while 26% have resulted in him being subbed.

Klopp has Roberto Firmino, Mohamed Salah and Diogo Jota who can operate up front, so Origi seldom features anymore. He’s made just one Premier League appearance this season, amassing two minutes of top-flight football, so it would benefit all parties if he moved on.

Liverpool will miss out on the chance to make back the £11m spent on Origi if he’s released in July, but it’s hard to see him being offered another new deal given the lack of opportunities – 13 Premier League starts since 2017/18. He could be sold for money in January, but mid-season deals are harder to pull off and leaves you little time to scour a replacement.

Origi is appreciated by supporters for scoring some important goals in big games, but logic has to trump sentimentality. Liverpool aren’t in a rush to sell the 26-year-old as his deal has three years remaining, but Origi won’t benefit from continually being on the periphery. He needs regular first-team football.