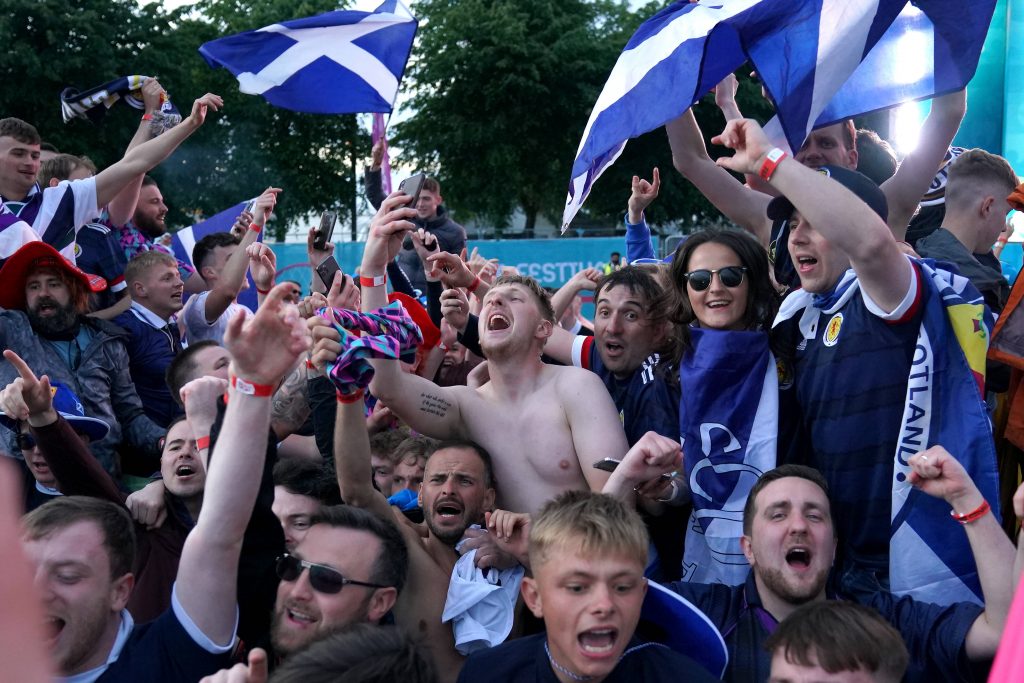 England drew 0-0 against Scotland at Wembley Stadium in their second game of the Euro 2020 group stage.

The spoils were shared, but the tale could have been a lot different had either side taken the few chances they had in the match.

Although Gareth Southgate’s men were much favoured heading into the contest, it was the Scots who registered the first effort of the game through recently registered Southampton striker Che Adams.

He received the ball from Stephen O’Donnell in the fourth minute and fired a shot towards Jordan Pickford’s net, but John Stones blocked the ball before his goalkeeper could be troubled.

Soon after, Stones himself was involved in an attacking move and will probably deem himself unlucky not to have scored with what was likely England’s best chance of the whole game.

Had he converted, it would have been just his third goal for the national side, his previous two coming in the same game against Panama at the 2018 World Cup.

Less than a minute later, Mason Mount fired wide after Raheem Sterling set the Chelsea man up following some good pressure high up the pitch. Southgate’s men were on top and perhaps should have been in front.

The onslaught of the Scotland goal continued when Phil Foden took a long-ball from Reece James in the area.

Foden – with his hair styled in honour of Paul Gascoigne circa 1996 – could only get his shot wide of the mark.

A rare Scottish chance in the opening 45 came just after the 20-minute mark through Arsenal’s Kieran Tierney, with the full-back volleying wide as the ball fell to him from a corner.

Then came another guilt-edged chance for the hosts through talisman Harry Kane, although on this occasion the Tottenham Hotspur star was unable to add to his already impressive goal tally.

The forward flung himself towards a cross by James from the right and did connect, but once again did not trouble Scotland ‘keeper David Marshall.

Concluding the rush of chances was one from the visitors which brought the best out of England ‘keeper Pickford after a challenging season with club side Everton.

O’Donnell volleyed towards goal through the legs of Luke Shaw, and Pickford got down well with a strong palm behind the ball to prevent the Three Lions from falling behind.

Striker Adams did indeed meet the rebound with a header but couldn’t direct goalwards and let the home side off the hook.

That was the final real chance of the first half, and the sides were level as half-time came around.

It’s fair to say that most of the chances in the second half fell to the evening’s visitors at Wembley, but the first one in the second 45 fell to England.

Mount took the ball from Shaw and aimed for the corner from range, but Marshall tipped the ball around the corner.

James also fired over, but soon after the hour mark the full-back had to clear an effort from Lyndon Dykes off the line and keep the scoreline level.

From a corner, the ball fell to QPR man Dykes in the box, and he swung an effort on the half-volley towards the net from close range, having Pickford beaten.

James came from nowhere to clear the ball with a strong header and ultimately earned England a point.

England boss Southgate did make substitutions to try and force the issue, including the introduction of Jack Grealish, but all were to no avail and the Three Lions weren’t able to create any clear cut chances in the final third of the game.

In fact, the only real chance in that period also fell to Scotland and once again Adams in particular.

A cross from the left was flicked on from the head of an England defender and fell to Adams, but the front man blazed over the bar.

As the encounter drew to a close, there was a melee in the Scotland box, though they never looked in any real danger and almost immediately after, the full-time whistle was blown by the referee to signal the end of a dull evening for England at Wembley.

Meanwhile, Scotland executed their game plan brilliantly at Wembley and deserved at least the point they left with.

The Tartan Army are still bottom of the group on 1 point, behind Croatia on goal difference alone.

Nothing in Group D is decided yet, and all is to play for ahead of the third and final games next week.