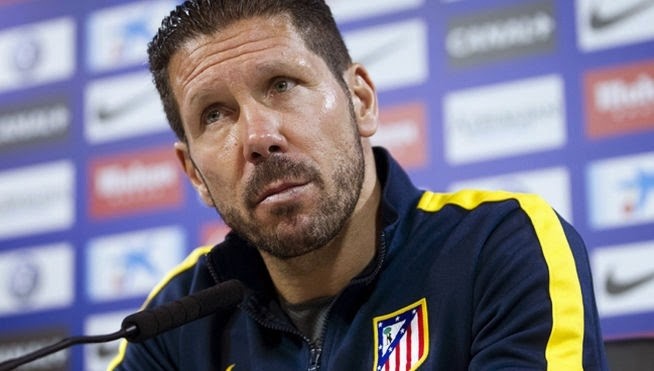 Diego ¨El Cholo¨ Simeone has singlehandedly transformed a team that was falling behind before his arrival in 2011. Atletico finished 7th in La Liga, and was eliminated from the Copa Del Rey as well as the Europa League in group stages.

Simeone’s philosophy, dubbed, ¨Cholismo¨ is bringing football back to its roots by focusing on the idea of ¨the team¨ rather than the individualism of star players.

Atletico Madrid does not have a Cristiano Ronaldo nor a Lionel Messi. They have a 123 million Euro budget in comparison to rival Real Madrid’s 515 million budget for the 2013-2014 season.

¨El Cholo¨ isn’t going to let financial limitations stop him from winning the 2014 Lisbon final, which he has already proved by winning the 2012 Europa League and SuperCup, along with the 2014 La Liga title after defeating the Blaugrana 1-1 at Camp Nou this past weekend.

So what’s the secret behind the Argentinian’s success?

In Simeone’s official biography titled, ¨El Efecto Simeone¨ (The Simeone Effect) by Santi Garcia Bustamente, the Atletico manager states that a successful manager must be able to not only motivate, but wholeheartedly convince his players that they CAN win and WILL win, even with the odds stacked against them.

In the book, Simeone looks back at his time in Argentina with Estudiantes, and refers to a specific example during the 2006 final between Boca and Estudiantes.

¨I told the fans, whoever doesn’t believe we can play a final with Boca shouldn’t come to the stadium.¨

His more challenging obstacle came later, when he had to convince centerback Alayes to hold down a faster, and significantly more talented Palacio.

¨I didn’t know exactly how to go about because I knew the look in his eyes was right. Palacio was way better, but there was no other option. So I took Alayes and said, You’ll get him, you’ll see. Don’t even let him turn around.¨

When Atletico Madrid reached the UEFA Supercup final in 2012 against Chelsea, the English side was the favourite, but it made no difference to the Atletico coach.

¨I needed to convince them that Chelsea wasn’t invincible. If there is a 1 in 100 chance we were going to take it.¨

What Simeone looks for in his players is 100% dedication to the collective goals of the team. If everyone is committed to the same idea, you can do big things. If there are cliques or diversions within a group, everything falls apart.

¨I always ask my players, what kind of season do you prefer? One where you play all the matches, but you finish lower on the table and out of all major competitions? Or do you prefer to play 20 matches out of a total of 38, score 8 goals, and the team is crowned a champion? It never fails. They always choose the second option.¨

Moreover, Simeone is quick to eliminate any form of ¨top player¨ self-entitlement or superiority. Most teams have their players eat at round tables in groups of 4-5. The players usually sit together based on nationality, interests, or experience, and don’t share these specific moments with the rest of the group.

¨Everybody at Atletico sits together at a long table. This way, they can’t avoid looking at each other in the face. There are no secrets. Everybody together, everybody talks. This sends a message.¨

When Simeone was asked about his strategy for the 2013-14 season, he answered, ¨We are going to do this match-by-match.¨

Match-by-match means no fixed idea or strategy but rather adapting to changes that come into play. Similarly, Simeone takes the same stance when deciding his starting eleven.

¨I don’t want players who want to be the main characters. If you don’t give it your all and I can feel it, someone else will take your place. Nothing is guaranteed, and if you fall asleep, you’re out¨

The Argentinian especially admired the rotation strategy of manager Sven-Goran Erikkson during his playing days at Serie A side Lazio, alongside the talents of Inzaghi, Nesta, Veron, Nedved, and Boksic to name a few.

¨It didn’t matter who played, we all knew there was a teammate who would take our place at any given moment and this is how we won the Serie A title for the second time in the club’s history, a Supercopa Italiana, and a European Cup in 1999-2000.¨

Above all, what makes Simeone an attractive leader is his character. He is remembered as a hot-tempered yet passionate player who gave it his all in every match, and is now transmitting the same attitude to his players. Although he is a legend at Atletico Madrid, he will be remembered more so as a coach because of the fantastic legacy he will leave behind.

*all quotes translated from Spanish and can be found in ¨El efecto Simeone¨ by Santi Garcia Bustamente.

You can read more from the author at http://ignoredbypep.wordpress.com.