Chelsea are edging closer to make their second official signing of the summer, as Diego Costa finally admits that he will be playing for the Blues next season. 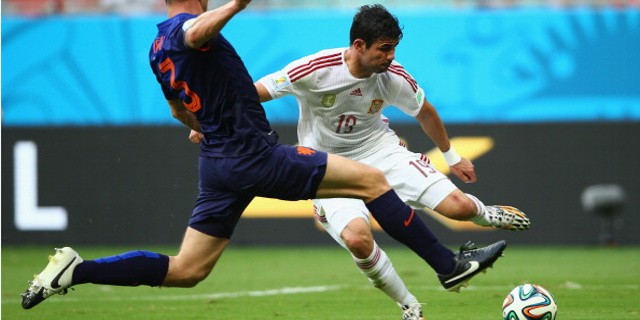 Costa, who has already successfully completed his medical ahead of his proposed move to Chelsea, recently dropped a big hint about his future destination. When asked if he was heading to Chelsea by Spanish station ‘Cadena Cope’, he said: “Well, it looks like that.”

Chelsea manager Jose Mourinho also admitted that he expects the deal to go through after the World Cup and even sent ‘good luck’ message to the Spain international.

Now Costa has confirmed that he will play for Chelsea next season, insisting he wants to test himself at one of the best leagues in the world. Chelsea have agreed a £35m deal, including agent fees and struck personal terms that will make Costa one of the highest paid players in the league.

“Why would I have chosen to play for Chelsea? It is a thing that is about to happen,” Costa told Goal. “Things are going in a direction and, if they keep going as they are going, it is the team I will play for in the next season.    “I’ve wanted to play in the Premier League for a while. Chelsea are one of the greatest clubs of the world so there are many factors that make you take a decision like this.”

Costa scored 36 goals in 52 games for Atletico Madrid last season, helping the Rojiblancos win the La Liga title for the first time in many years. Chelsea have already signed Cesc Fabregas from Barcelona and if the reports are to be believed the Blues are close to signing Atletico Madrid defender Filipe Luis as well.