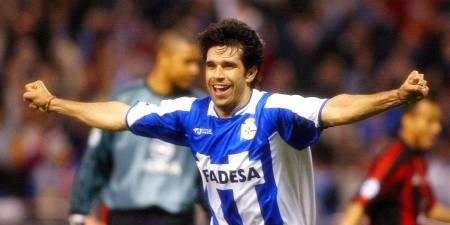 Last night Juan Carlos Valerón watched his side’s latest collapse from his new position: the bench. Sadly, it looks like the career of football’s more delicate talents of the last couple of decades is going to end in sadly subdued circumstances.

At the age of 37, and with a history of injury running through his career, this might well be his last campaign. Valerón never quite fulfilled his potential, but that’s no reason not to value him.

His elegant style, drifting between midfield and attack, finding space and delivering killer passes with accuracy and artistry, has always caught the eye. Sometimes, it threatened to take him to the very peak of the game, yet that promise always faded at the crucial moment.

He was a regular member of a Spanish side whose nature is hard to imagine now, in this era of dominance for Vicente Del Bosque’s side: they were packed with talent but constantly under performed.

Valerón’s international credentials include over fifty caps and trips to three disastrous finals tournaments, on both continental and world stages.

For his clubs, Valerón was often a leading light, yet the success he deserved constantly evaded him. He sparkled for an Atletico Madrid side which was relegated, then was the beating heart of Deportivo La Coruna’s brief blossoming at the peak of European football.

Yet their dream was unfulfilled: they narrowly lost out to Jose Mourinho’s Porto in the semi-final and fell a missed penalty short of clinching the Spanish title. Valerón was always there, always prompting, always falling just short.

And then came the decline. A series of serious knee injuries punched a hole in the heart of his career, and inevitably Depor crumbled in his absence.

He dragged himself back onto the pitch and tried to inspire the club with whom he’d signed a huge contract at his peak, never once giving the impression he regretted signing away the rest of his career to the Galicians.

As relegation loomed two seasons ago he beavered away in a doomed attempt to turn back the tide. Needing a win in the final game, Valerón was brilliant. He created chance after chance; his teammates squandered them. And the Depor dream had died.

Except there were still a couple more twists left in Valerón’s story. Depor, stricken off the pitch and demoralised on it, somehow dusted themselvs off and attacked the Liga Adelante with vigour. Valerón shone, leading his beloved side back at the first attempt.

Things were beautifully set up for this season to be a valedictory tour of La Liga for him, bringing back memories of the warmth Gianfranco Zola experienced when he made the rounds of Serie A one last time with Cagliari.

Valerón has never quite been able to beat the odds though, and Depor’s promotion had merely papered over the cracks of their massive financial problems. Valerón’s story was clearly never meant to be so straightforward though, and it appears that he will denied his farewell tour.

Things started well enough: he was featuring regularly at the start of the season, starting fourteen of the seventeen games before the winter break, with two further substitute appearances, and being nursed through the campaign by being left out of the Copa del Rey squad.

There were flashes of the old brilliance too: in the Derbi Gallego he earned a point with a beautiful assist, his dancing feet bewitching the Celta defence. But then circumstances changed.

Depor’s struggle to stay in the top division intensified, and coach Jose Luis Oltra paid with his job. His replacement, Domingos, has a much more practical approach to coaching and wants to organise his side to fight against the rising odds of relegation.

His reputation in previous jobs has been for creating sides which play with high energy both with and without the ball. Bad news for a luxury play-maker like Valerón.

Since Domingos’ arrival Valerón has been watching from the bench, managing just ten minutes on the pitch from four games. There’s no logical reason to assume this will change any time soon, unless the situation becomes so desperate that Domingos is forced to abandon his game-plan and throw caution to the wind.

It’s hardly the dignified farewell Valerón deserves, but if he’s succeeded in nothing else during his career, he’s clearly established himself as a loyal, decent man. He might be worthy of a more glorious send-off, but going down with the ship seems a sadly appropriate way to end a career which is filled with honour and a faint whiff of unfulfilled potential.Valerón