Alan Pardew admitted before last weekend’s defeat at Chelsea that has side had switched off after securing their Premier League status in early April. The Eagles head into the weekend on a three-game losing streak without a goal during that run.

Manchester United’s record is identical over three games too and could do with a victory this weekend to make sure they don’t miss out on a top four finish. Louis van Gaal’s side are in fourth, four points ahead of nearest challengers Liverpool who go to Chelsea on Sunday.

Strikers Fraizer Campbell and Marouane Chamakh are out with hamstring injuries and both have seen very little action in 2015.

Pardew has Glenn Murray, Dwight Gayle, Yaya Sanogo and Shola Ameobi as options up front and the rest of his squad are all available. Mile Jedinak was an unused substitute last weekend but is good to go on Saturday.

Phil Jones is ready to return after missing the last three games since the Manchester derby. The England international was an unused substitute in defeat to West Brom last weekend but is ready to partner Chris Smalling in the centre of defence this weekend.

Marcos Rojo, Luke Shaw and Rafael are all defensive injuries for van Gaal, whilst Jonny Evans is a doubt.

Michael Carrick has missed the last three games with a calf injury but there are no other injury worries for the Red Devils. 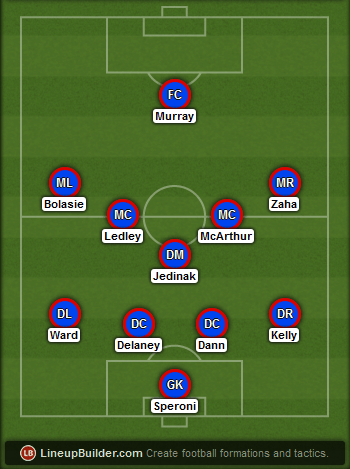 Alan Pardew plays a 4-5-1 formation with pacey wingers. He has Yannick Bolasie, Jason Puncheon and former-United player Wilfried Zaha as his options out there. Glenn Murray has been their best striker during the second half of the season so we expect him to lead the line. Mile Jedinak provides a strong anchor in midfield, in front of a back four who are without a clean sheet in their last 11 Premier League games. 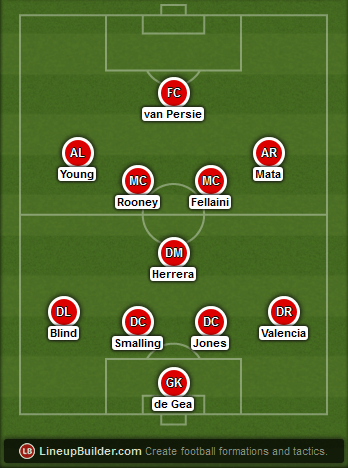 Daley Blind could start at left-back with both Luke Shaw and Marcos Rojo out. Ashley Young is an alternative option there to counter Palace’s pace down the wings, which would also allow Ángel Di María a return to the starting lineup. Ander Herrera has been the anchor in midfield during Michael Carrick’s absence and United completely dominated possession last weekend as a result. Robin van Persie played the full 90 minutes in that game.

Juan Mata vs Joel Ward
Manchester United’s Spanish playmaker had a surprisingly quiet game last weekend but can be expected to be a big part of their plans this weekend. The left-footer playing on the right wing means he’ll be a big threat to Crystal Palace’s left-back when he cuts inside. He’s made some good runs in the penalty area this season, breaking free of his marker to find space. Juan Mata also creates chances from deep or out wide and has Robin van Persie as his target man this weekend.

Yannick Bolasie vs Antonio Valencia
Neither side have had much productivity up front in their last three games but for the home side one of their threats should come down the left front Yannick Bolasie. The pacey wideman who enjoys running at defenders may have some luck versus United’s makeshift right-back Antonio Valencia. The Ecuadorian likes to bomb forward too, so Palace’s star man could find time and space on the counter attack.

Wayne Rooney vs Mile Jedinak
Crystal Palace’s Australian midfielder has been excellent in breaking up opponents’ attacks during his time in the Premier League. Mile Jedinak has not had too much playing time of late and faces a tough test in midfield with the battling and goalscoring Wayne Rooney playing alongside the tall and physical Marouane Fellaini. United will be keen to win this match up as they are two goalscoring threats and two players whom Louis van Gaal will likely plot most of his attacks around.

0 – Neither of these sides have scored in any of their last three games.

85% – Manchester United have won 11 of their last 13 Premier League games versus Crystal Palace.