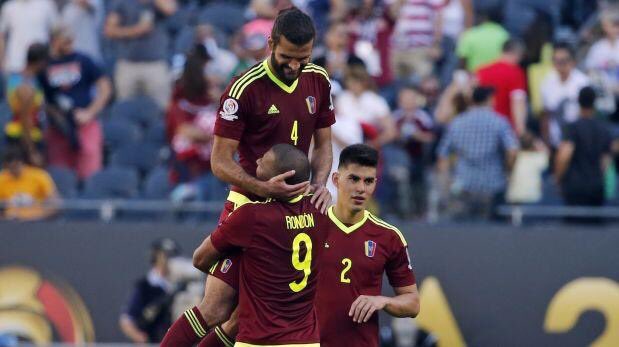 Salomon Rondon scored the only goal of the match as Venezuela seal a massive 1-0 victory over Uruguay at Lincoln Financial Field, Philadelphia on Thursday.

In another Group C match, Mexico comfortably won 2-0 against Jamaica at Rose Bowl to progress into the quarterfinals of Copa America.

Highlights: Goals from Uruguay vs Venezuela

Highlights: Goals from Mexico vs Jamaica

Cavani failed to step up in the absence of Suarez : The Barcelona star picked up a hamstring injury ahead of the tournament and couldn’t participate in either of the games. Uruguay looked up to PSG striker Edinson Cavani to deliver in the absence of Suarez but he failed horribly. Suarez is not only a great goal scorer but he brings a lot more to the game with his overall involvement and creativity.

Unfortunately, Edi Cavani failed to inspire his team to raise their game up in the absence of the former Liverpool striker. And it hardly instils confidence when your best striker on the pitch goes on missing sitters, especially at a time when the entire team is looking up to him to deliver.

Venezuela are exciting to watch:  Rafael Dudamel’s side may not have enough world-class players in the side but collectively they are a force to reckon with. They defend as a unit and look dangerous on the counter. Against Uruguay, they created some fantastic scoring opportunities and had they been more clinical in front of goal, the scoreline would have looked a lot better.

Hernandez one of the best poachers in the world:  Javier Hernandez is a typical old school type striker, a deadly poacher inside the box. The problem is football has become more tactical and poacher-type strikers are in less demand nowadays. Hernandez is not like Aguero, Aubameyang or Suarez – players who bring a lot more to the game with their overall contributions. But Chicharito gives you goal. You create a chance for him, and he will score. He notched up his 45th goal for his country today and is just one short of equalling Jaret Borgetti’s record of being Mexico’s all-time leading goal scorer.

Weird performance from Jamaica: Mexico didn’t have the best tactical setup with god knows what on earth was Juan Carlos Osorio thinking when he started with Miguel Layun as a shuttling midfielder. Jamaica started the game brightly, created few good opportunities but the end product was clearly lacking.

One get the impression that Jamaica didn’t play well to their potential and were outplayed by a highly spirited Mexico side. Mexico are vulnerable in defence and their tactical shape up aren’t too smart either, but they covered it up with a superior attacking flair. However, a better team (may be Argentina, Colombia or Brazil) or even Jamaica on a day with a better luck could have punished Mexico badly that what we saw in the game.