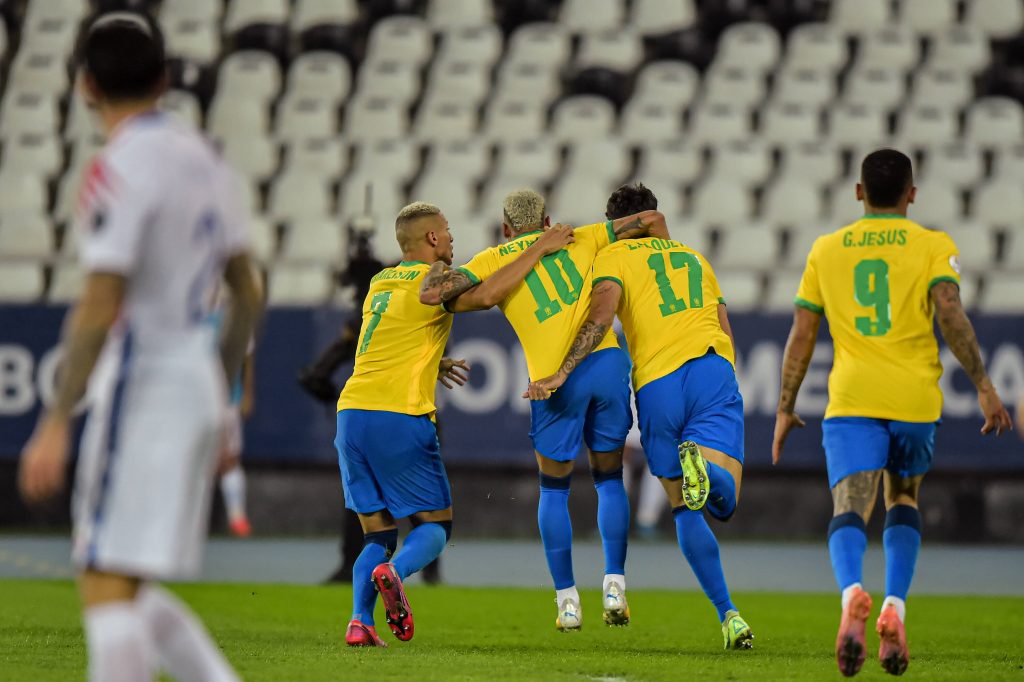 The knockout stages of Copa America are underway, and they’ve begun with a bang.

The first game of the evening came in Goiania, as Peru faced Paraguay. Then it was the big one, with holders and favourites Brazil coming up against 2015 and 2016 champions Chile.

Here is how the games went.

The first knockout tie of the competition brought us the highest-scoring game, with Peru and Paraguay playing out an absolute cracker.

Paraguay took the lead early on when captain Gustavo Gomez bundled in from a corner. But this lead lasted fewer than ten minutes, as Gianluca Lapadula tapped home an equaliser from Andre Carrillo’s cross.

Things got a whole lot trickier for Paraguay in the lead up to half time. Lapadula notched his second of the game, and goalscorer Gomez was sent off for a second yellow card. The centre-back was fuming about the decision.

But this didn’t deter them, and they managed to get an equaliser early in the second half.

This time, it was the other centre-back who got on the scoresheet, with Junior Alonso finishing at the back post from a corner.

Peru thought they had snatched a winner with ten minutes remaining when Yoshimar Yotun’s long-range effort deflected kindly into the back of the net. But this was STILL not the end of the drama.

The numbers were evened up with five minutes to go when Carrillo was shown a second yellow card.

He left the pitch in tears, now knowing that he would be suspended for the semi-final should they get there.

And in the dying seconds, Paraguay found an equaliser. Substitute Gabriel Avalos managed to turn in from close range to take the game to penalties.

The shootout wasn’t the most impressive, but Peru looked in control when David Martinez and Braian Samudio blazed their spot-kicks over the crossbar.

However, Paraguayan goalkeeper Antony Silva was in top form to deny Santiago Ormeno and Christian Cueva.

However, Silva was not able to repeat his heroics in sudden death. Alberto Espinola saw his penalty saved by Pedro Gallese, and Miguel Trauco converted to take his side to the semi-finals.

Unfortunately, the other tie of the evening wasn’t so exciting. There was little action to take about in the first half, with a Roberto Firmino miss being the only clear cut chance of note.

Things began to get livelier at the start of the second half when Lucas Paqueta scored within seconds of coming on.

The Lyon man muscled his way past a couple of Chilean defenders and fired a shot past Claudio Bravo.

But moments later, Chile were given a lifeline when Gabriel Jesus was sent off after catching Eugenio Mena in the face with his studs.

They pressed for an equaliser, with Ben Brereton looping a header onto the crossbar. But they were unable to break down a stubborn Brazil defence, and the game finished 1-0.

Brazil progress to the semi-finals, where they will face Peru in Rio de Janeiro.