Image courtesy of ON International.

Yesterday morning (27 May) in Milan, Clarence Seedorf of AC Milan held a press conference to announce a humanitarian initiative with far-reaching objectives for the African continent. Mr. Seedorf is the first global ambassador for Goal4Africa, an organization that we profiled last week at Soccerlens.

“Goal4Africa is endorsed by powerful partners worldwide including global organisations, world leaders, celebrities and football players. As implementing partners, the Nelson Mandela Foundation and the Peace and Sport Foundation already contribute to and benefit from the Foundation. Goal4Africa enjoys a massive support from the football community. Top soccer player Clarence Seedorf is Goal4Africa´s first global ambassador.”

“Seedorf: ‘Nelson Mandela has been an incredible inspiration to me throughout my lifetime and his efforts continue to bring positive change, says Seedorf. ‘Goal4Africa is a program that I believe in wholeheartedly and am sure will reach the world in the same way Live Aid has done.’ ”

Source: Press Release by Kate Carlisle of ON International. 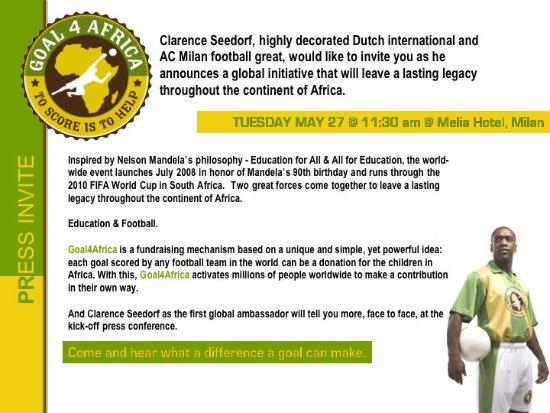 Comments from the Press Conference in Milan

“Players, artists, the whole world can contribute,” Seedorf said. “There are other projects, but this is the biggest and has enormous potential.”

“People sometimes say that football is just about money, but I have found incredible availability from players, coaches and clubs,” Seedorf said. “Real Madrid, Chelsea and Liverpool have all been very helpful and will endorse this project.”

Charity Game at the Allianz Arena

On 12 July 2008 at the Allianz Arena in Munich, a series of events will take place to commemorate the 90th birthday of the Honorable Nelson Mandela, his vision for education of African children, along with the launch of Goal4Africa. As part of this event, there will be a charity game with many luminaries from world football. In addition to Clarence Seedorf, here is a preliminary roster of others who will lend their celebrity and support in Munich:

Football as a Unifying Force

Goal4Africa enables us, as fans, to sponsor any team in the world, whether they are professional, amateur, or a school league, for every goal scored up until the World Cup final on 11 July 2010. Each goal will be assigned its own number, and you can download an official certificate that will be signed by Sepp Blatter and Nelson Mandela. In order to take part, you will need to register at Goal4Africa.

“Football is a global language. It can bridge social, cultural, and religious divides. This in turn can contribute to the well-being of whole communities and countries.” Clarence Seedorf

To obtain tickets to the event, please visit the German language site: www.goal4africa.de

I would like to thank Ms. Kate Carlisle, Communications Manager of ON International, for her kind assistance with this article.