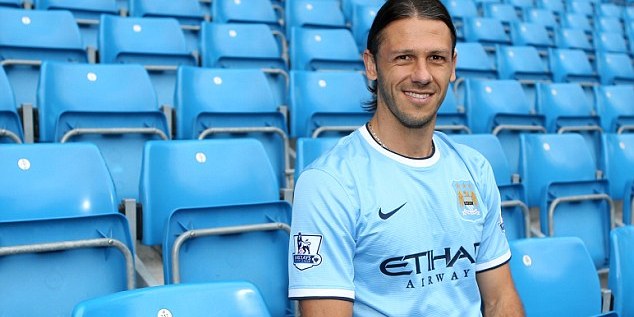 Manuel Pellegrini has been handed the crude test now. The Chilean, who claimed that City have the better squad will have to find a way to deal with so many injury problems to some of his key players, especially in the defence.

At this moment, the defence is completely injury-ravaged. New summer signing, Martin Demichelis has been ruled out for at least six weeks, after the defender suffered a serious knee injury, sustained in training.

After undergoing a scan, the club doctor revealed that there is a ligament damage but the good news for everyone is, he won’t be undergoing any surgery.

The 32-year-old has joined the Blues from Atletico Madrid over the weekend, as Pellegrini wanted to add bodies for the central defensive position. The club is already without the talisman skipper Vincent Kompany, while youngster Matija Nastasic and right-back Micah Richards, are also out for lengthy period of time.

Pellegrini was forced to make a defensive reinforcement following those injuries, but it seems he is running out of luck, as he is now left with Joleon Lescott to marshal the fragile defensive unit at his disposal. Midfielder Javi Garcia partnered Lescott in the 3-2 defeat at the hands of Cardiff, and it will be interesting to see how Pellegrini handles this crisis now.

Further, the form of first-choice goal keeper Joe Hart has been nothing less than disappointing, which has prompted the manager to issue a warning that his position is not guaranteed in the side, not anymore.

How will City react to this defensive crisis? Share your views below…