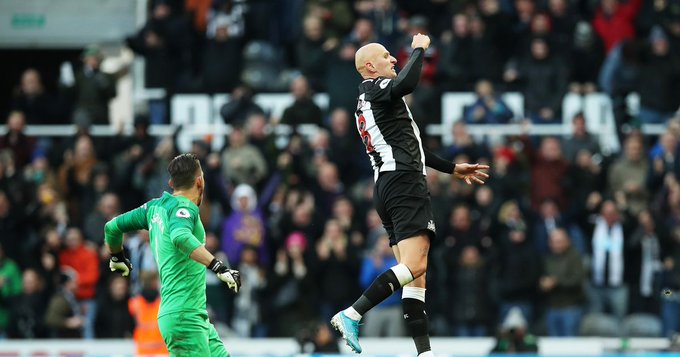 Newcastle United secured their fifth Premier League victory of the campaign at the expense of Sheffield United at Bramall Lane last night, climbing to 11th in the table.

Allan Saint-Maximin opened his account with a header after a perfect cross from Javier Manquillo 15 minutes into the game, and Martin Dubravka was in inspired form at the other end for the visitors to keep Sheffield out, making three good saves in the first-half.

Newcastle found the back of the net with their second shot on target of the game, with Jonjo Shelvey scoring in back-to-back Premier League games for the very first time in his career.

Andy Carroll was flagged offside by the linesman after putting the midfielder through on goal with a flick, but the referee waved play on and the Newcastle star scored.

Sheffield defenders didn’t bother to go after Shelvey, while goalkeeper Dean Henderson only made a half-hearted attempt to save the effort.

A quick VAR check confirmed Carroll was onside during the build-up to the goal, and it rightly stood.

Match of the Day presenter Gary Lineker and BBC pundit Chris Sutton both agreed playing to the whistle remains crucial, reacting thus to the controversial goal on Twitter:

Just seen the Jonjo Shelvey goal. Was inevitable that this would happen at some point. Play to the whistle has never been more important.

Shelvey 2-0 … why did the official put his flag up?? Well done Shelvey play to the whistle 👏👏

Ridiculous flag up from official in Newcastle game…

Sheffield have themselves to blame for not following the first thing you are told as a youngster playing football, suffering their fourth loss of the campaign as a result.

The victory is a massive boost for Newcastle, with seven places and five points now between them and the relegation zone after picking up 19 points in their opening 15 league games of the season.