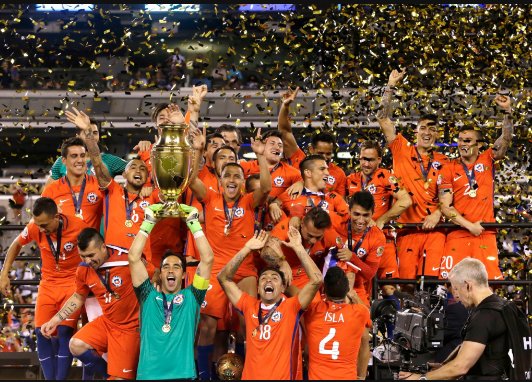 Chile waited 99 years to lift their first major trophy. They now have two back to back Copa America titles. Lionel Messi missed a penalty and Claudio Bravo pulled off a great save off Lucas Biglia as Chile held their nerves to win the trophy after 120 minutes of goalless football at Metlife stadium in New Jersey.

Argentina started the match brilliantly and should have taken the lead when Gonzalo Higuain found himself in a one-on-one situation with Bravo, but the Napoli striker failed to keep his composure and his chip went wide of the target.

Chile went down to 10-men after Marcelo Diaz picked up his second booking in the 28th minute. The Chile defender who was cautioned for a rash challenge on Messi earlier received marching orders after fouling the Barcelona forward again a few minutes later.

Argentina could not exploit the extra man advantage and in turn were reduced to 10-men after Manchester United defender Marcos Rojo was sent off for a challenge on Vidal.

From there on it was a cagey affair with both teams struggling to dominate the proceedings. Unlike in the other matches, the Messi-Banega combination didn’t work this time and it was left to the little magician to do all by himself. Banega was picked up by a Messi with a lovely pass in a dangerous area but his left-footed shot from outside the box went high and wide to the left.

Sergio Aguero, after wasting a couple of good half-chances, came close to scoring but his looping header was brilliantly tipped over the bar by Bravo in the extra time.

Eduardo Vargas was kept relatively quiet throughout the night nearly gave Chile the lead but his header from the centre of the box is saved in the top left corner. The Chile striker went close again but his right footed shot from outside the box was saved by Romero.

Argentina were given a hope when Romero saved Vidal’s penalty kick but Messi blazed it over the bar to leave the scoreboard unharmed. Nicolás Castillo, Charles Aránguiz, Jean Beausejour and Francisco Silva all converted their penalties while Lucas Biglia missed his spot kick to hand Chile their second Copa title in successive years.