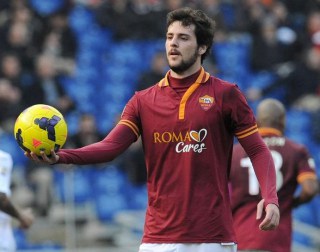 Chelsea’s move for Roma’s prodigal striker Matija Destro has hit a snag. According to Italian website GDM, AC Milan Vice-President Adriano Galliani has made contact with Roma Chairman Walter Sabatini over a possible move for the 23 year-old.

Following Mario Balotelli’s departure from Milan to Liverpool, the club are looking for his replacement. The first name on the list was said to be Colombian forward Jackson Martinez but a move for the Porto man seems doubtful. This has made them now turn to Destro.

Destro has been compared to Milan legend Filippo Inzaghi on several occasions, and has a shrewd eye for goal. Inzaghi, now the manager at the San Siro, would love therefore love to have him at the club.

Reports on Thursday stated that Chelsea were interested in bringing Destro to Stamford Bridge for £20 million. They were also ready to offer Fernando Torres on loan at the Italian capital as a part of the deal.

Many feel at the Blues have put all their eggs in one basket, with Diego Costa shouldering most of the goalscoring responsibility in the side. Manager Jose Mourinho is therefore trying to strengthen the strikeforce in what remains of the transfer window, with Destro said to be a leading candidate to come in. This inquiry from Milan though, casts a doubt over the Italian’s next destination.