Deal agreed but Chelsea still miss out on midfielder

Tiago Mendes should have joined Chelsea by now if the reports from Spain are to be believed. The Portuguese was thought to have played a major role in persuading Diego Costa and Filipe Luis to join the Londoners, while almost all the major newspapers in Spain claimed that Tiago will join Chelsea on a free transfer from Atletico. While Costa and Luis have completed their moves to Chelsea, it seems like Tiago is the unfortunate one to miss out on returning back to his old club.

The former Chelsea midfielder was all set to return to his former club on free on a two-year-deal and Marca claim that a personal deal was agreed as well, bit it seems, the Portuguese won’t be able to join the Blues due to a problem in licenses.

His agent Jorge Mendes is now looking for options elsewhere, as he is currently without a club, following the termination of his contract with Atletico. He is likely to stay in Spain and wants to join La Liga outfit Valencia. Atletico Madrid were keen to hand him a one-year-deal, but it seems the player is not keen to accept such proposals. 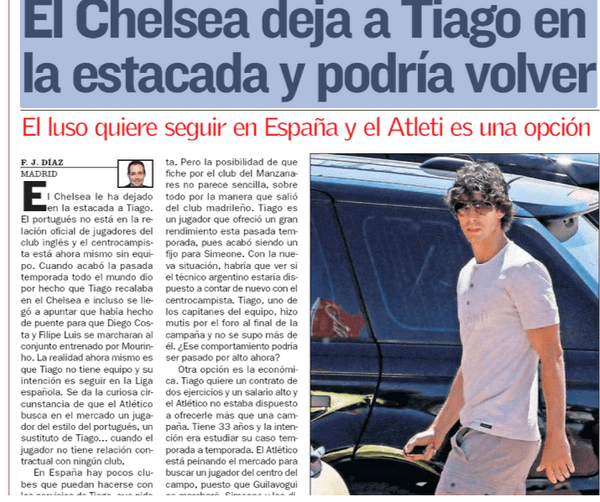 Not that Chelsea will be too disappointed for missing out on him, but Tiago would have been a good back-up addition for the squad. The Blues are hoping to get the best out of youngster Oriol Romeu, who has a signed a new three year contract extension at the London club.