Chelsea are looking to complete the signing of striker Diego Costa within this week, according to reports in Spain.

The Blues already agreed a deal for the Spain international, while Costa had completed his medical as well. Furthermore, the Atletico striker explicitly stated during the World Cup that he will move to Chelsea after the tournament. Following Spain’s early shock exit in Brazil, it seems like both Chelsea and Atletico are keen to conclude the deal at the earliest. 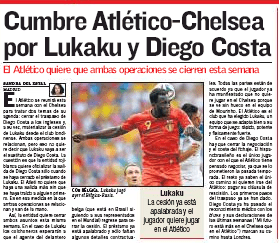 Spanish newspaper AS reports today that Atletico Madrid will be looking to the complete the signing of Belgium striker, Romelu Lukaku, who is having a terrible campaign for his nation in the World Cup, albeit on loan.

Also, the same newspaper reported yesterday that Chelsea have already sealed the deal for Tiago Mendes, who will join on a free transfer. AS reports that both the clubs are willing to sort all the deals within this week.

Chelsea have been one of the busiest clubs in Europe at the moment. The Londoners have already signed Cesc Fabregas from Barcelona and are expecting plethora of top signings as well. Also, the club are looking to see few players in order to balance the books. David Luis and Frank Lampard have already left the club, while the futures of John Obi Mikel and Petr Cech are uncertain at the Bridge.