Chelsea manager, Jose Mourinho is going to extreme measures to keep Thibaut Courtois out of the clutches of Barcelona, reports Spanish newspaper, Marca. 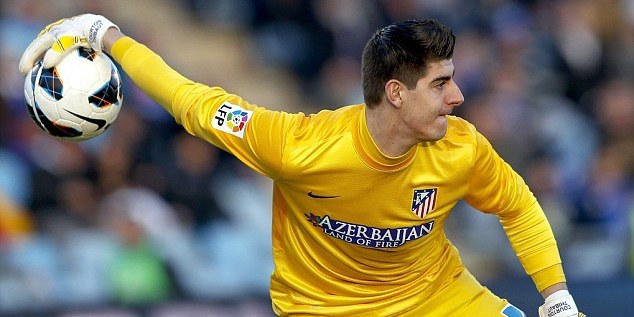 The Portuguese boss demands that Courtois sign on for another three seasons at Stamford Bridge, claims Marca; or be recalled to see out the remaining years of his contract on the side-lines.

Courtois has spent three excellent seasons out on loan at Atletico Madrid, and has a deal with Chelsea until 2016.

The 21-year-old is said to be top of Barcelona’s wish-list; with Barca president, Sandro Rosell, looking to replace Valdes who is leaving at the end of the season.

Marca says Mourinho’s stance has been adopted so as to maintain the juggling act of keeping the Belgian and Petr Cech both on the books; or ensure that Chelsea are sufficiently compensated when selling Courtois. If he does sign on, it could even dissuade the Catalan outfit from going for such an expensive option.

Mourinho sees the Belgian as an ideal replacement for Cech in time, and is loath to let arguably the best young keeper in the world sidle off to Chelsea’s fierce, European rivals.

Marca believes that Mourinho is not to be called on his bluff, as with the ongoing Juan Mata situation at the Bridge, the Portuguese is certainly not afraid of blunt decisions.