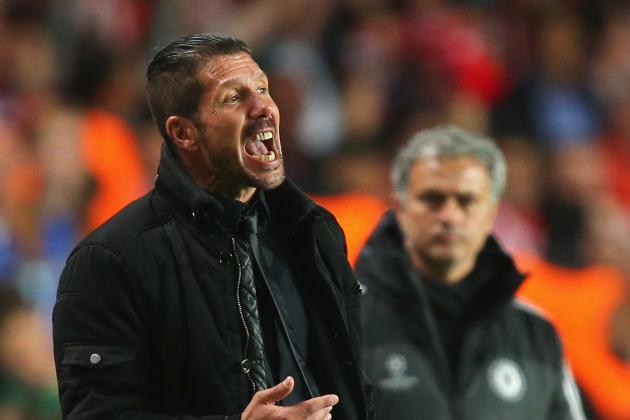 Atletico Madrid manager Diego Simeone is a hot commodity at the moment, with several top European clubs looking to prise him away from the Spanish capital. The likes of Manchester City and Paris Saint-Germain will be interested in the Argentine in the summer, along with the reigning and defending English Premier League champions Chelsea.

It was revealed a couple of days ago that the Blues were ready to offer a whopping £7.65 million per year contract to land him at Stamford Bridge next season. It was therefore, hardly a surprise that he was asked about his future at Atletico in the press conference ahead of his side’s Copa Del Rey clash against Celta Vigo on Tuesday night. Simeone was defiant about a long-term stay at the Vicente Calderon a few months ago, but said today that he is always under the fear of being sacked.

He said, as quoted here by Marca, “Can I become Atletico Madrid’s Sir Alex Ferguson? I always think that I can be sacked. Based on that, I always try to give everything I have in every match and training session.”

Simeone’s credentials are hardly in any doubt, as he has taken Atletico from a side who were ‘good, but never good enough’ to being serial winners. Under him, they won the Europa League in 2011 before capturing the La Liga title ahead of Barcelona and Real Madrid in 2013. They were also losing finalists in the UEFA Champions League that year. The current La Liga table sees them sitting at the summit, two points ahead of Barcelona but having played a game more.

Chelsea, on the other hand, have gone from heroes to zeros in an incredibly shot span of time. Their superstars have just not been able to kick on from their title win last year and the club are currently in 14th place in the table. Jose Mourinho was sacked as manager last month and replaced on an interim basis by Guus Hiddink.

In the summer, Roman Abramovich will be looking to bring in someone with a proven track record who can bring some stability at the helm. Simeone is sure to be very close to, if not at, the very top of that list.