Chelsea have reached an agreement with AC Milan for the possible loan move of Dutch midfielder Marco van Ginkel, who has also been targeted by Portugal club Benfica.

Reliable journalist GDM claim that it is up to the player to decide, whether he will stay at Stamford Bridge and fight for places or will join Milan on loan where he will get regular games under belt.

Portugal newspapers A Bola and O Jogo reported this morning that Van Ginkel, the 21-year-old highly rated Dutch midfielder has been reportedly targeted by Benfica.

“We are waitng for Chelsea to tell us if the player is in their plans or not. Only one week left before the market closes, there’s not much time,” said his agent Karl Jansen.

“We know about Benfica’s interest and there’s been contact with the player not long ago.” 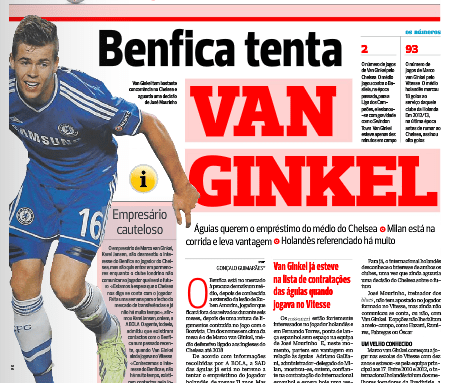 Van Ginkel joined Chelsea Vitesse in 2013. He missed lot of action last season through injury and has only made two league appearances for the Blues.

With Cesc Fabregas, Nemanja Matic, Ramires and John Obi Mikel standing high up the pecking order, it is ideal for Van Ginkel to make a loan move elsewhere and get regular games to boost his confidence.