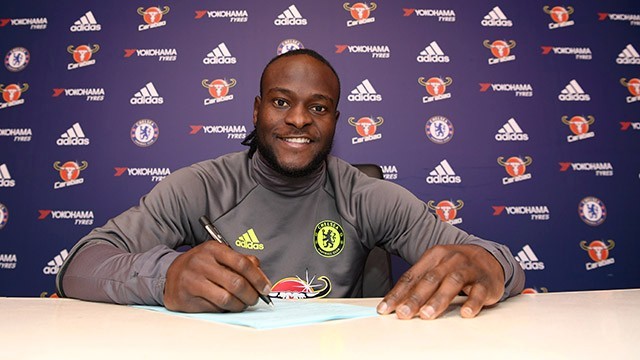 Chelsea winger Victor Moses has extended his contract at Stamford Bridge, keeping him at the club until 2021. The Blues reported the news via there official website today. The Nigerian has signed a two-year extension, after becoming a regular in the first team this season under Antonio Conte.

Moses’ future seemed destined to be away from Chelsea at the start of the campaign. Having signed from Wigan Athletic in 2012, he didn’t make single league appearance for the club between the 2013-14 and 2015-16 campaigns. Under Jose Mourinho, he was sent out on loan to three different clubs – Liverpool, Stoke City and West Ham United.

But Conte found a new role for him in the side, deploying him at right wing-back. This is a move that has yielded great success, and Moses has scored 4 goals in all competitions thus far. He has been one of the most improved players at the club this season. One of the first names on the team-sheet, Moses has started every Premier League game since 1 October 2016. That date marked the beginning of a 13-match winning streak for Chelsea, one that saw them go from 8th to 1st.

It is a huge sign of confidence for the club to offer him a new deal with just under a third of the season still left to play. There was news in November of Barcelona being interested in bringing Moses to the Nou Camp. The Blues have therefore rushed to secure his stay.

Speaking after signing the new contract, Moses had the following to say.

‘I feel very excited. I’m delighted to be here for another few years now and to sign a new deal. Now it’s time to concentrate on the team and keep working hard to make sure we win games and try to win the Premier League this season.

We’re having a great season, I’m enjoying my football and we have a good manager here that has given every single one of us confidence. I just want to keep on enjoying it and working hard for the team.’

Chelsea are currently top of the Premier League, with a 10-point advantage over second-placed Spurs. They need another 29 points from the 12 remaining games to be mathematically sure of being champions. A feature of this team has been the group of unspectacular yet consistently effective players. Undoubtedly, Moses is one of them. Under the current circumstances, he can certainly look at being a very important part of the core for a long time to come.