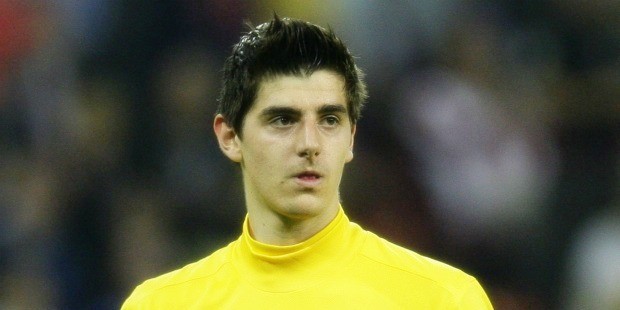 Thibaut Courtois may be a name unknown to many in English football, but he signed for a Premier League club two years ago and, if rumours are to be believed, is the subject of £30million interest from no other than Barcelona, Oh, and by the way, he’s never kicked a ball for his club in a competitive game. So, what’s all the fuss about.

Part of the renaissance of Belgian football, Courtois was signed from Genk by Chelsea for what now seems like a paltry £7million in 2011, and was immediately sent out on loan to Atletico Madrid. At ten years younger than currently Blue’s stalwart Petr Cech, it was clear that the club were looking to place the young ‘keeper as the heir apparent to the Czech international. Whilst in Spain however, a couple of seasons of stellar performances and rave reviews have propelled Courtois into the attention of top clubs looking for a goalkeeper. The argument rises of course as to why, if he is so good, are Chelsea content to have playing in Spain, rather than at Stamford Bridge.

The complication of course is that goalkeepers are a fairly particular breed of player. Whilst it’s perfectly acceptable to rotate outfield players, especially higher up the park, it’s not a format that fits well with the guy between the sticks. With this in mind, Chelsea have made the calculation that for the player to develop fully, regular game time in a high level league is much more preferable than warming Chelsea’s bench and playing the occasional League Cup game, or the like. Chelsea’s current number two, Mark Shwarzer provides adequate cover for that eventuality, and any injury cover required. It’s a similar approach to that taken with another young Belgian on their book, Romelu Lukaku. Such being the case, Chelsea would undoubtedly be loath to sell Courtois, but with Cech showing no sign of diminishing power and the extended longevity of goalkeepers in the modern game, the big Czech could easily be in place for another five years or so. Additionally, with the UEFA Financial Fair Play rules on the horizon, a profit of some £20million or so on any transfer would be welcome.

The Camp Nou interest in Courtois is stimulated by the growing belief that Victor Valdes will leave the club at the end of the season. It has been rumoured that an approach to Liverpool to take Pepe Reina back to Catalunya after his loan spell at Napoli, was on the cards, and this would probably be an acceptable, if short term solution. Courtois, on theo ther hand, represents an entirely different way of addressing the issue. Given his age, should he prove capable of the step up to the exulted heights of Barcelona’s expectations, he could be in position for at least ten years.

If the player maintains his level of consistency and excellence throughout the current season, there’s every likelihood that Chelsea will be faced with a dilemma come next May. With a bid from Barcelona on the table, they may have to either take the money, or make the unenviable decision to replace Cech with the young Belgian. It’s probably a decision that they’d rather not take, but that could be out of their hands.