Thibaut Courtois has admitted that his current situation is proving to be ‘difficult’, with Real Madrid the latest team to show an interest in the Chelsea loan star.

Courtois, who is currently in his third season on loan at La Liga side Atletico Madrid, is unsure whether his long-term future is at Stamford Bridge, with Petr Cech still the Chelsea number one under Jose Mourinho.

Atletico have made it clear that they wish to keep hold of the 21-year-old, who has blossomed into one of the best goalkeepers in the world at the Vicente Calderón, with Barcelona and, most recently, Real Madrid also keen to sign the Belgian. 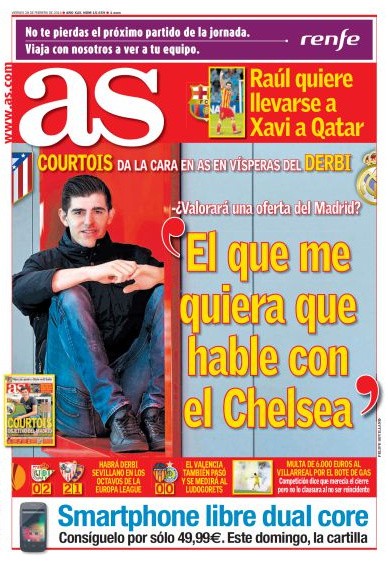 “I do not want to rush and make a bad decision,” Courtois said during an interview with Spanish newspaper ‘AS’ ,

“We must still think about it. It is difficult with so many interested parties, plus it’s not the only time to think about my future,”

“I belong to Chelsea, I have a contract, and I do not have to rush to make a decision.”

Courtois, who is valued at upwards of €25m, has a contract with Chelsea until 2016, with the Blues currently faced with the problem of whether to allow the youngster to oust the ever-reliable Cech, or face losing the loan star permanently.

Real Madrid have joined rivals Barcelona the hunt for the keeper, with Atletico presedent Enrique Cerezo revealing (via Marca) that the current La Liga leaders also consider Courtois to be the ‘best in the world’.

When asked about the Real speculation, Courtois replied: “I’ve never heard of that – those are rumours. If someone in Europe wants to sign me they have to speak with Chelsea and the English club will decide what to do.”

What do you think? What should Courtois do? Will this all be resolved come the summer? Let me know in the comments below…