Chelsea are close in signing deals for Atletico Madrid duo Diego Costa and Filipe Luis. According to The Telegraph, the Blues used used Wednesday’s Champions League semi-final tie to continue negotiations with the Spanish outfit.

While Chelsea were throughly linked with Diego Costa in the last few months, it seemed to us a matter of time, before the deal to take fruition. However, Chelsea are keen to sign Brazilian left-back Filipe Luis, which would raise further doubts over Ashley Cole’s future at the club. 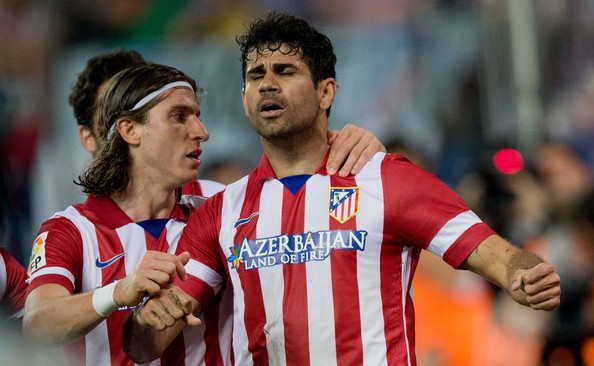 Chelsea had initially targeted Southampton’s prodigy Luke Shaw to fill the left-back role, but they expect the youngster to join Manchester United. Therefore, they’ve shifted their attention towards Luis, who would cost around £17m.

The report says talks between the two clubs have progressed significantly and that both moves have been agreed. Costa, who scored 27 league goals this season, wants to join Chelsea, while the London club are happy to meet his £31m buy-out clause.

It could well happen that Fernando Torres would be allowed to leave the club and the Spanish striker could join his boyhood club Atletico Madrid, while Chelsea will also listen to offers for Romelu Lukaku, who is a reported target of Tottenham.

Furthermore, Chelsea goal keeper Thibaut Courtois, who is on loan to Atletico, is set to return to his parent club next season.