Brighton and Hove Albion levelled on points with Newcastle United at the top (separated only by the goal difference) after winning 3-0 against Derby County.

It was a strong performance from Chis Hughton’s side who dominated the game from start to finish. The defeat, however, proved costly for Derby, who lost seven of their last 13 Championship games.

Derby’s shocking run of form since the turn of the year led to a major set up change at the club, with manager Steve McClaren being relieved of his duty.

Fulham stunned everyone with a fantastic 3-1 win against Newcastle United at St James’ Park. It was the Magpies’ second home defeat of the season.

Ryan Sessegnon, a reported target of many top Premier League clubs like Spurs and Liverpool, scored twice for the Cottagers to earn an important three points for his side.

Nottingham Forest suffered their fifth defeat in their last seven Championship games, when they lost 1-0 to Burton. Cauley Woodrow scored the only goal of the match in the 26th minute.

Leeds United were held to a frustrating 0-0 draw by QPR at Elland Road. Garry Monk’s side are still holding on to their fourth spot, but their gap with Huddersfield has increased (having played a game less) to five points.

Aston Villa’s revival under Steve Bruce continues after they registered their fourth win in their last five games. Villa bounced back from their 1-0 defeat to Huddersfield in their last game to earn a comfortable 2-0 victory against Sheffield Wednesday. 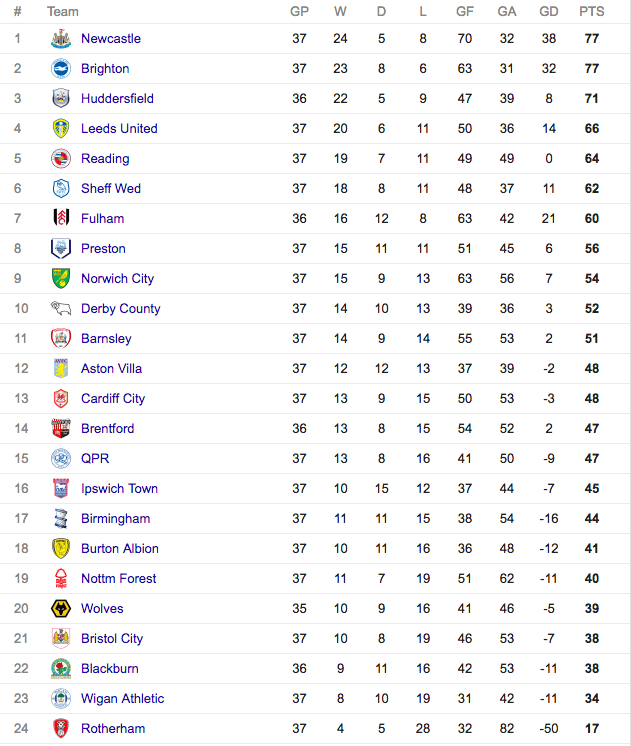