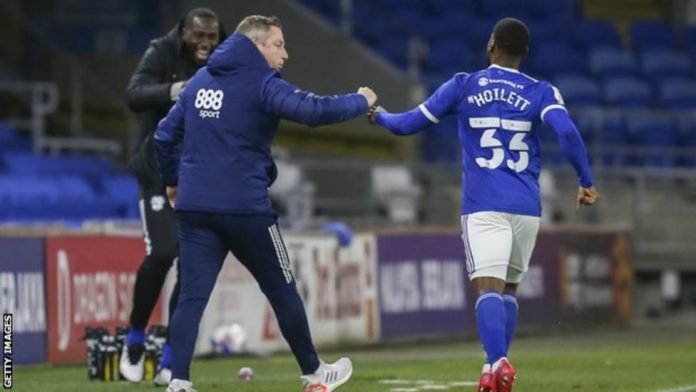 Cardiff City eased their way to a 3-0 victory against an in form Barnley on Tuesday night. Cardiff City had not won any of their 4 previous home games this season, whilst Barnsley had won their last 2 matches under new manager Valerien Ismael.

Cardiff City were quick out of the blocks playing with real intensity and purpose. Barnsley were finding the new 4-4-2 style too hot to handle as Cardiff took an early lead.

There was a possible penalty shout for a challenge on Junior Hoilett just before left-back Joe Bennet swung in a cross which Hoilett controlled nicely to slot away. It was the Canadian’s first goal of this campaign and his 50th in English football.

This would prove to be bad news for Barnsley as they had lost their last 60 EFL Championship encounters when conceding the first goal. This is dating back to almost four years.

Barnsley were missing talisman Corley Woodrow going into this game due to injury. This would be evident as Barnsley failed to have a single shot in the first 45 minutes.

Cardiff grew stronger as the half went on and missed a glorious opportunity to double their advantage. A free-kick was played into the area when a flick-on found its way to Kieffer Moore at the far post. The header was aimed straight at goalkeeper Jack Walton and the chance was gone.

Moore had played for Barnsley previously and would have loved to have scored against his former employers.

Cardiff goalkeeper Alex Smithies was alert to the danger as a long direct ball found its way to Conor Chaplin. Smithies closed Chaplin down quickly to put an end to a rare venture forward for the away side.

Barnsley made a tactical substitution on the 40th minute, a bold move from the Tykes boss. Nevertheless, Harry Wilson was brought down in the box and Cardiff were awarded a spot-kick. The referee Dean Whitestone deliberated for a while but eventually made the correct call.

Joe Ralls stepped up to take the penalty and dispatched it with ease into the bottom right corner. This was the third penalty Ralls had taken in the last two games, scoring two and missing one. Although Ralls did score with the follow up against QPR.

This would signal the end of the first half which Cardiff dominated. If Barnsley were to get back into this game they would have to improve in the second half.

The away side were raring to go for the second half entering the field much sooner than the hosts. Barnsley did start brightly with the passing tempo increased moving the ball around a lot quicker

However, it must be said Barnsley did not really threaten the home sides goal whatsoever. They once again became sloppy and gave the ball away far too easily and cheaply. Although, the pressing continued from Cardiff possibly contributing to the poor Barnsley passing accuracy.

Robert Glatzel and Kieffer Moore seemed to have good chemistry upfront for the Bluebirds linking with each other well. But on the 67th minute, Glatzel was substituted for on-loan Liverpool winger Sheyi Ojo.

This in turn would allow Harry Wilson to move into the number ten position. More or less his preferred position on the pitch.

Within ten minutes Ralls would stroke the ball into Wilson on the edge of the area and with a wonder strike from the Welshman it was 3-0.

With only thirteen minutes to play Cardiff saw the game out with a very professional display both offensively and defensively. Whilst Barnsley looked a shell of the team that beat Watford on Saturday.

To put it bluntly, Barnsley were simply not at the races today. As good as Cardiff were, Barnsley played straight into the home sides hands.

The 4-4-2 style that Cardiff boss Neil Harris implemented was the perfect game-plan. As soon as Barnsley gained possession, Cardiff hounded them like dogs, with an intense press forcing Barnsley into making mistakes.

There were always options when possession was regained for the Bluebirds. Either out wide, through the middle, or playing a long direct pass up to the big men upfront.

Cardiff will rise up the table with this victory, with many teams around them having a game in hand. However, if manager Neil Harris can orchestrate this type of performance on a consistent basis, a return to the Premier League may come sooner rather than later.