‘Parking the bus’ has become a familiar phrase when talking about Rangers in Europe and Walter Smith’s men secured a superb 0-0 at Old Trafford with a resilient display. 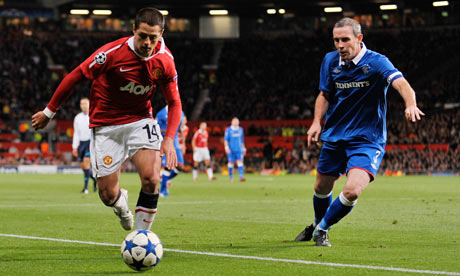 Davie Weir and Rangers frustrated Man United in Matchday One

The Champions League makes an eagerly-anticipated return to Ibrox with Turkish champions Bursaspor the visitors on Wednesday night. The SPL champions endured a horrific campaign at Ibrox last season with two 4-1 defeats and a 2-0 loss to VFB Stuttgart. However, the Gers have made an impressive start to the SPL season with 6 wins from 6 games including wins at Hibernian and Aberdeen.

Wednesday night could be one of the major deciding factors in whether Rangers progress to the next stage or to the Europa League. Rangers will be aware this is potentially a ‘must-win’ game against Pot 4 Bursaspor. Last year, Walter Smith decided to ‘park the bus’ against Romanian minnows Unirea Urziceni and it was a decision that would come back to bite his bottom. Obviously, Bursaspor are a better side than Unirea after their amazing achievement to win the Turkish SuperLig but Rangers will still need to treat it like a game they have to win.

Midfielder Steven Davis is a major doubt for Wednesday’s clash after picking up a hamstring injury during Rangers’ 3-2 win at Pittodrie. The Northern Irish international is an integral part of the Rangers side and his second-half performance was key to Rangers’ impressive comeback against Aberdeen. Striker James Beattie and youngster John Fleck will not be involved in Wednesday’s squad and Walter Smith will also be without £4m striker Nikica Jelavic who is ineligible.

Weiss and Miller will be crucial for Rangers against Bursaspor

Whether Davis plays or not might decide how Rangers get on against Bursaspor but the starting tactics from Smith will be the major factor in the scoreline. To his advantage, Smith has a natural attacking midfielder in Vladimir Weiss who is the type of player that could set Ibrox alight in the Champions League. Weiss was benched against Manchester United, but with the onus on Rangers to get a home result they will have to field their talented Slovakian against the Turkish side. Filling the hole that Davis would normally occupy is another decision that will need to be made by Smith. Steven Naismith has shown his versatility in being able to slot into any midfield position and his energy could mean he will slot in to central midfield alongside Lee McCulloch and Maurice Edu. Replacing Naismith on the right of midfield could be Steven Whittaker or Kyle Lafferty but an outsider could be Kyle Hutton who put in an excellent performance against Dunfermline last week and he’d be a straight swap for Davis in the middle.

The Turkish side will be relatively unknown to Rangers and they will be hoping that Bursaspor don’t have the same fortunes as Unirea, Sevilla and Stuttgart last season. Rangers coach Iain Durrant has been to Turkey to watch the in-form side and he has pin-pointed the wider areas where Rangers could hurt Bursa as they have two attacking full-backs in Gokcek Vederson and Ali Tandogan. On the flank is arguably Bursa’s star man in Volkan Sen who will need to be watched carefully by Rangers on Wednesday. In attack is talisman Sercan Yildirim who is one of Turkey’s highly-rated youngsters.

The feel-good factor has arrived back at Ibrox with some good displays this season and a sack of goals. Without Jelavic, Rangers will need to step up and adapt to their new system and SPL top-goalscorer Kenny Miller will be relied on to score the important goals to add to Rangers’ good start in the Champions League.