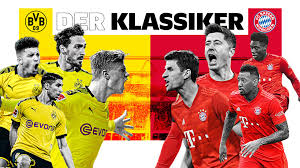 Just two days after the last fixture, the Bundesliga is back with the Englische Woche (English Week) – a week in which clubs play three matches in the space of seven days, typically weekend, midweek and the next weekend. The midweek round gets off to a flyer, with a potentially title-deciding Der Klassiker. Let’s take a quick look at all of this week’s fixtures.

It’s first-plays-second in this week’s first match – Der Klassiker with a title twist. A victory for Dortmund would reduce their deficit to the Champions to a solitary point, but if Bayern win, they will be able to open up a seven-point cushion at the top of the table. This Klassiker will be for more than just bragging rights. Further, a loss for Bayern can bring title hopes to the likes of RB Leipzig, Bayer 04 Leverkusen and Borussia Mönchengladbach. The title hopes of four teams rest on Dortmund, but will they deliver?

Player to Watch: Robert Lewandowski – The Polish hitman is on course to his fifth Torjägerkanone, leading the Bundesliga’s goal-scoring chart with 27 goals from 27 games, two of which came against Dortmund in the reverse fixture. The madlad scores one goal in every game in the Bundesliga on average. These are absolutely superhuman stats, and the fact that he was initially rated 89 on FIFA 20 has to be a criminal offence. He is simply the best striker in the world right now.

17th-placed Bremen host Borussia Mönchengladbach, who are 5th in the table. After a massive victory against Freiburg, and a late draw for Fortuna, who are above them, a win can take the home side level on points with Düsseldorf, giving a much-needed boost to their survival hopes. But, Gladbach are also in desperate need of a win, as the loss to Leverkusen has seen them drop out of the top 4 of the Bundesliga table. Their title hopes are almost non-existent, as they are 9 points away from league leaders Bayern, but a victory for Dortmund in Der Klassiker could see those hopes reignited. It will be an interesting match for both ends of the table in Bremen.

Player to Watch: Marcus Thuram – The Frenchman got his 8th goal of the season in the defeat to Leverkusen, and he will once again be crucial in the Foals’ attacks.

14th-place Frankfurt host high-flying Freiburg, who are 7th in the Bundesliga table. Eintracht will be keen to bounce back after the 5-2 thrashing at the hands of the champions, Bayern München, where they were utterly shambolic for most of the game. They need a win to avoid getting sucked into the relegation battle. Freiburg, on the other hand, suffered a shock 1-0 defeat against Werder Bremen, and since only 3 points separate them and 11th-placed Hertha Berlin, they will not want to drop any points. This will be a crucial match for both teams.

Player to Watch: Martin Hinteregger – The centre-back got a surprise brace against Bayern of all teams, which has moved him up to 8 goals for the season, meaning that he is Frankfurt’s top-scorer now. He is a major threat from set-pieces, and if Freiburg concede any free-kicks in advanced positions, they will have lots to worry about.

On the back of a crucial 3-1 victory against near-rivals Gladbach, Leverkusen host 6th-placed Wolfsburg, who lost 2-0 to Dortmund last time around. As stated in the Der Klassiker preview, a win for Dortmund will see 4th-placed Leverkusen right back in the title race, but they can’t afford to drop points elsewhere. Wolfsburg are 6th but only have a 3 point buffer to 9th-placed Hoffenheim, and will need wins to cement their spot in the Europa League. This will certainly be an intriguing fixture.

Player to Watch: Kai Havertz – The club captain for Leverkusen has been scoring for fun after the restart, with two braces in two games. He’s been involved in 15 Bundesliga goals for his side, with 10 goals and 5 assists. He’s in fine form right now, and will be keen to keep the Wolves at bay with his goal-scoring prowess.

3rd-placed Leipzig welcome 11th-placed Hertha Berlin to the Red Bull Arena, on the back of a 5-0 thrashing of Mainz. Hertha also enjoyed success, as they battered local rivals Union 4-0 in the Berlin Derby. A win for Bayern in Der Klassiker coupled with a victory for Leipzig in their match would see them move ahead of Dortmund in the Bundesliga table on goal-difference. The opposite result would see them close the gap to the top to 4 points. Basically, if they beat Berlin, they will well and truly be involved in the title race. But Berlin could break into the top half of the table with a victory, and perhaps get involved in the fight for the Europa League spots. Another interesting fixture to kick-off Wednesday.

Player to Watch:  Timo Werner – The rapid German ended his temporary goal-drought in style, with a hat-trick against Mainz. he looks to have rediscovered his form, and is only 3 goals behind Robert Lewandowski in the race for the Torjägerkanone. He seems certain to score.

12th-place Augsburg host bottom club Paderborn in the WWK Arena, in a crucial match for both sides. After dispatching Schalke 3-0, Augsburg will be looking for another victory, which can take them 9 points clear of the drop zone, and clear any relegation worries that they may have. Paderborn, on the other hand, are winless in 8 after their draw with Hoffenheim. Both sides will set out determined to get a victory.

Player to Watch: Florian Niederlechner – The Augsburg forward is their club’s top-scorer this season, with 11 goals to go with his 6 assists. However, he’s been kept quiet in the last 7 matches, and will be keen to get back to his scoring-ways.

13th-placed Union host 15th-placed Mainz for a relegation six-pointer. Union are 6 points away from the drop zone, but only 3 points above Mainz. A win for Union would see them go clear of the relegation battle for good, but a loss would see them sucked right into it. Further, both teams come into this match on the back of a thrashing, 4-0 and 5-0 respectively. This will be a crucial match for Union’s season.

Player to Watch: Robin Quaison – The Mainz forward desperately tried to make things happen for his side against Leipzig, but he was alone in his endeavours. Against Union, however, he will almost certainly get far more support, and this should help him add to his tally of 12 goals and 2 assists this season.

9th-plays-10th as Hoffenheim host Köln, who are only 2 points behind them in the Bundesliga table. A win for either side will fuel their European dream, but a loss may just end up killing it. Hoffenheim will look to make up for their disappointing draw against Paderborn, as Köln will look to take a victory after stealing a late draw against Düsseldorf.

Player to Watch: Jhon Córdoba – The 27-year old Striker is an ever-present attacking threat. He worked his socks off in the last game, as he spent 90 minutes chasing long balls, and got a late goal to secure a draw for his side. His physique will surely cause troubles for Hoffenheim’s defence, as he will look to add to his tally of 11 goals in this season.

16th-place Fortuna will welcome 8th-place Schalke to the Merkur Spielarena, with both sides in desperate need of points. The home side threw away yet another victory late on against Köln, whereas Schalke are now winless in 9 games, and if David Wagner wants to hold on to his job, he needs a win now. Fortuna, on the other hand, need a win to keep their survival hopes alive.

Player to Watch: Erik Thommy – The German scored his sixth goal of the season last week, and has been in fine form since the restart. Schalke’s already-rattled defence will need to find a way to contain him if their side is going to have any chance of winning.

It will be a most intriguing Englische Woche, as the Bundesliga hottens up, both at the top and bottom. Be sure to look out for the match reports of all the matches.