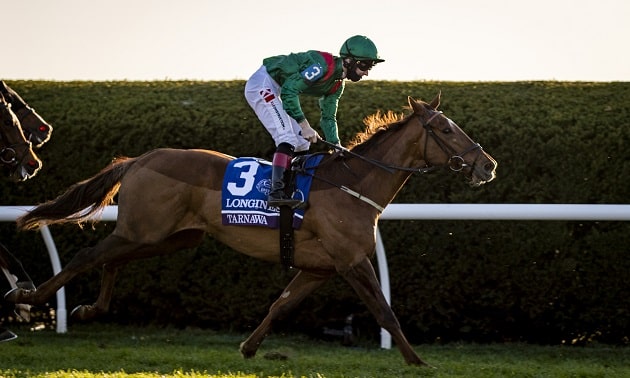 The 1m 4f Breeders Cup Turf sponsored by Longines is America’s World Championship for middle-distance thoroughbreds running on grass. Del Mar in sunny California hosts the meeting this year with this race on Saturday, 6 November (11:40).

Runners from the British Isles and Europe tackle US horses on home turf here. American thoroughbreds have found it difficult to compete with the transatlantic raiders in recent years. Aidan O’Brien alone has four winners of the Breeders Cup Turf in the last decade alone. Find out who SportsLens tipsters fancy this year below…

Why Tarnawa is favourite for the Breeders Cup Turf

Irish trainer Dermot Weld triumphed in this race 12 months ago with Tarnawa. Her entire campaign this season has been geared towards the autumn. Now a five-year-old, this Shamardal mare has been a magnificent servant to her owner, the Aga Khan. Tarnawa readily beat Magical by a length at Keeneland that hosted this meeting last year.

She turned the Ballyroan Stakes into a procession on her reappearance. That was only a Group 3 but Tarnawa cruised clear for an easy 6 1/2 lengths success. She hasn’t won since, however, but twice been unlucky to finish second. Tarnawa found herself carried towards the stands’ side by St Mark’s Basilica in the Irish Champion Stakes at Leopardstown.

That was only over 1m 2f and she is better at a longer trip like this. A rank outsider in Torquator Tasso then caused a massive upset in the Prix de l’Arc de Triomphe at Longchamp. Tarnawa went down fighting by less than a length on both occasions. She handles any ground, so the firm going won’t be a problem at Del Mar.

Tarnawa deserves a bit of luck and it’s not too difficult seeing why she is the 7/4 favourite for the Breeders Cup Turf with Betfred. With better luck in-running on her last two starts, she may have been odds-on and looking to complete a hat-trick of Group/Grade 1 successes like she managed last autumn.

Bet on Tarnawa with Betfred

With one exception, punters can get 20/1 and bigger on British horse racing betting sites for the American turf thoroughbreds contesting this. The fancied horse from the home team is Domestic Spending, who has shaped in his races like stepping up to this distance should suit.

Chad Brown is the last US trainer to win the Breeders Cup Turf too. In Domestic Spending, he has a four-year-old Kingman gelding that landed the Saratoga Derby and Hollywood Derby during the second half of last season. Since then, this horse dead heated in the Bourbon Turf Classic at Churchill Downs and followed-up in the Manhattan Stakes at Belmont Park.

Domestic Spending was nearest at the finish and beaten a neck over 1m 2f in a Grade 1 at Arlington last time out. It is well worth going up in trip with him, based on how he ends his races. As a result, Domestic Spending is 5/1 with Bet365 to resume winning ways here.

Back Domestic Spending with Bet365

Roger Varian runs Teona in this rather than Filly & Mare turf race. As a three-year-old filly, the daughter of Sea The Stars gets weight all-round. After just six career starts, Teona is open to plenty of further progress. She ran into Snowfall, the Epsom and Irish Oaks heroine, on more than one occasion earlier in the season.

Since then, however, Teona took the August Stakes at Windsor from Desert Encounter. The runner-up filled the same spot in the Canadian International at Woodbine, a race he has won twice before. Teona then put in a career best when landing the Group 1 Prix Vermeille at Longchamp in September but didn’t return to Paris for Arc Weekend.

Connections may have been saving her for a tilt at the Breeders Cup Turf instead. Females have won three of the last six renewals, so the sex allowance makes a big difference. Teona is a tempting top price of 8/1 with William Hill for her hat-trick.

Bet on Teona with William Hill

Yibir overpriced on pick of form

Powerful global owners Godolphin have a couple of runners here. While Walton Street won the Canadian International on his last start across the Atlantic, Yibir took America by storm with victory in the Jockey Club Derby at Belmont Park. This three-year-old Dubawi gelding needs a sound surface to be at his best.

Yibir gets that firm going here in the Breeders Cup Turf and started the campaign off with a fine third in the Sandown Classic Trial. That form threw up the Epsom Derby and King George winner Adayar in second. Yibir was just a neck behind his owner-stable companion. When back on better ground for the Bahrain Trophy at Newmarket, he resumed winning ways.

He also the won Great Voltigeur at York defeating subsequent St Leger third The Mediterranean. Scope, the fifth horse home that day, has since landed the Group 1 Prix Royal-Oak at Longchamp. Yibir defeated Soldier Rising, the Saratoga Derby second, by more than double the distance that recent Cox Plate hero State Of Rest did on his last start too.

In winning the Jockey Club Derby, he proved a trip overseas was no problem. Yibir will relish the conditions, so simply looks overpriced at 9/1 with Bet365 for another successful transatlantic raid. Charlie Appleby’s top jockey William Buick rides him over Walton Street – a 12/1 chance with Betfred – here too. Yibir looks a great each way bet.

Back Yibir each way with Bet365