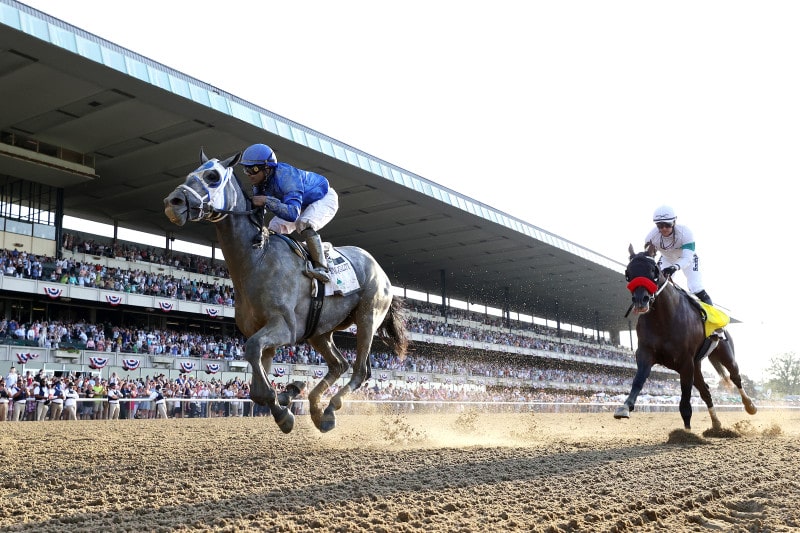 Bob Baffert has trained four of the last seven winners, but all of those were either at Keeneland or Santa Anita. What makes the Breeders Cup Classic so special is that generations of American thoroughbreds collide in the contest. Check out which horses appeals to SportsLens tipsters right here.

Why Knicks Go is favourite in the Breeders Cup Classic betting

Anyone who watched the World Championships from Keeneland last year couldn’t be anything other than impressed by Knicks Go. He didn’t run in the Breeders Cup Classic but in the Dirt Mile race at the meeting. A five-year-old son of Paynter trained by Brad Cox, Knicks Go made all and forged clear of his rivals with two furlongs left.

Under a Joel Rosario drive, he put three lengths between himself and his nearest pursuer. Cox then took Knicks Go to Gulfstream Park and won the Pegasus World Cup in Florida easing down. He was also far from disgraced in the Saudi Cup when fourth the mighty Mishriff, who has since won the Sheema Classic and Juddmonte International on turf.

Although then disappointing when fourth in the Metropolitan Handicap at Belmont Park, Knicks Go has since won his last three starts. Two of those saw him bolt up in Grade 3 company at long odds-on, but there is nothing wrong with the form of his 4 1/2 lengths romp in the Whitney Stakes at Saratoga. Knicks Go put Metropolitan conqueror Silver State firmly in his place that day.

The Breeders Cup Classic is a furlong further than he’s ever raced before, but Knicks Go should have no problem with the trip. On the pick of his form, there is a clear case for him being favourite on horse racing betting sites for this. Knicks Go is 9/4 with Betfred for a crowning victory.

Back Knicks Go with Betfred

Cox clearly has a strong hand in this race as he also saddles the second-favourite Essential Quality. Owned by Godolphin, this three-year-old Tapit colt has just one defeat in nine career starts. He won the Juvenile dirt race at this meeting 12 months ago, form which has worked out very well.

Essential Quality completed a hat-trick of juvenile successes there, then landed both of his Kentucky Derby trials. A game success in the Blue Grass Stakes back at Keeneland punched his ticket to Churchill Downs. That other world famous American race is the only blemish on Essential Quality’s CV as he was carried wide into the straight and stayed on to be fourth.

When upped to 1m 4f for the Belmont Stakes, however, he put that disappointment behind him. Essential Quality reversed Kentucky Derby form with old rival Hot Rod Charlie, then handled going down in trip for a Grade 2 success at Saratoga. He returned to the New York venue for the Travers Stakes and completed his hat-trick there. With proven stamina over further, there are no excuses here.

As Essential Quality comes to the Breeders Cup Classic with twice as long a break as stable companion Knicks Go, and also gets weight for age from him, there is plenty to like about him. Luis Saez is again aboard, so Bet365 go 3/1 about the pair winning this massive race. It would be a first-ever success in the contest for Godolphin.

Back Essential Quality with Bet365

Hot Rod Charlie there or thereabouts

The aforementioned Hot Rod Charlie has run in a number of top dirt races for three-year-olds stateside this year. His Louisiana Derby success en route to Churchill Downs came for Leandro Mora but, that race apart, he has been trained throughout the rest of his career by Doug O’Neill.

Hot Rod Charlie has only got the better of Essential Quality once in three previous encounters. That was in the Kentucky Derby where just a head separated the pair of them. When things have gone right, Hot Rod Charlie has been on the losing end of their duel. That is a concern, especially given how prominent in the Breeders Cup Classic betting this Oxbow colt is.

Despite being first past the post in the Haskell Invitational on his penultimate start, Hot Rod Charlie got disqualified after being adjudged to have interfered with Midnight Bourbon. He confirmed superiority over that one in the Pennsylvania Derby last time out, though. This demands more, so others are more appealing despite standout odds of 11/2 with William Hill for Hot Rod Charlie.

Given those four successes over the last seven years in this race, anything saddled by Baffert commands respect. Kentucky Derby hero Medina Spirit is his sole representative in the Breeders Cup Classic this year. The three-year-old Protonico colt delivered when it mattered most rather than in his spring trials.

While Medina Spirit couldn’t follow-up on Kentucky Derby glory in the Preakness Stakes at Pimlico, Baffert gave him most of the summer off. Following his break, he ran in a Listed race here at Del Mar. That outing had Breeders Cup preparation written all over it. It may prove a shrewd move by Medina Spirit’s handler too.

Back up in grade for the Awesome Again Stakes at Santa Anita last time out, he routed the opposition. Medina Spirit ran out an easy five-length winner over re-opposing rival Stiletto Boy. Others in-behind, Express Train and Tripoli, take him on again but there’s no obvious reason why that form isn’t solid.

This under the radar Breeders Cup Classic prep from Baffert may pay off with Medina Spirit. Any horse with course form and a Kentucky Derby on their CV cannot be discounted. At a top-price 7/1 with William Hill, Medina Spirit looks a solid each way play against the market principals.

Back Medina Spirit with William Hill

Art Collector and Max Player have some form

A couple of four-year-olds may have more to offer, but need to conceding weight for age to the younger generation. Art Collector represents trainer William Mott, who won this a decade ago. This Bernardini colt is two from two since joining the barn. When in the care of Thomas Drury, Art Collector didn’t deliver in either the Preakness or the Dirt Mile.

Luis Saez has been the key to this horse in 2021. He partnered Art Collector on all three of his starts to victory. However, he keeps the ride on Essential Quality, so Mike Smith now takes the ride for the first time. He has three Breeders Cup Classic wins in the saddle since 2009. Art Collector needs to build on his Woodward Stakes success at Belmont Park here, and odds of 9/1 reflect that.

When the World Championships were last at Del Mar in 2017, Steve Asmussen trained the winner. He runs Max Player this time around. Something of a late bloomer after a disappointing campaign last season, the Honor Code colt built on a Grade 2 success with victory at the highest level around Saratoga in September.

Max Player ran on strongly for a four-length win in the Jockey Club Gold Cup. What he has beaten in his two triumphs since joining Asmussen is open to question, but he could do no more than defeat the opposition in front of him. The Breeders Cup Classic needs another career best from Max Player. He is 9/1 with Bet365 to continue improving.

Back Max Player with Bet365