First Hazard and now Oscar. Both these Chelsea players were targeted by PSG and both have rejected the chances to move to France.

Oscar, who scored in the opening match for Brazil in the World Cup, has been a long term target of PSG, with Brazilian Lucas Moura claiming in March that he would love to see his fellow compatriot join him at the Parc des Princes. 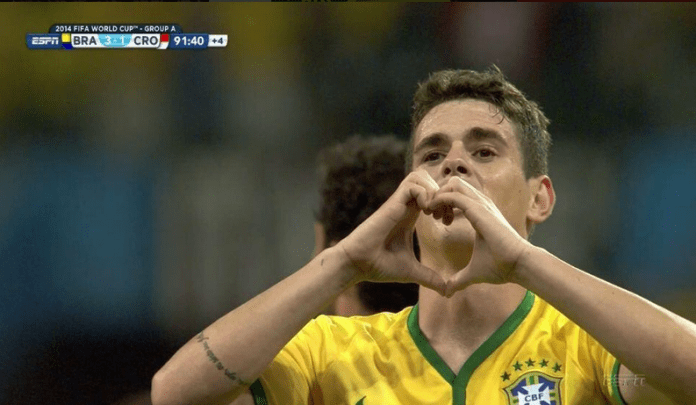 “Oscar is a very good player. A rare talent in today’s football, given his qualities. He is very complete and is very smart. We need someone like him at PSG.” he said as quoted by The Daily Telegraph.

PSG have already signed Chelsea’s highly rated defender David Luiz but the Londoners have no intentions of letting either Hazard or Oscar leave. Chelsea boss Jose Mourinho said few months back that PSG need to throw £300million for both the players to enter into any sort of negotiations.

Oscar has now admitted that he has had offers from the French champions, but at the same time pledges his loyalty to Chelsea.

“I had contacts with Paris Saint-Germain, it is true, but I have not gone beyond. The next season I will stay at Chelsea,” said Oscar as quoted by TMW

Chelsea have already signed Cesc Fabregas from Barcelona and if the reports are to be believed they’re close to signing Diego Costa and Tiago Mendes from Atletico Madrid as well.