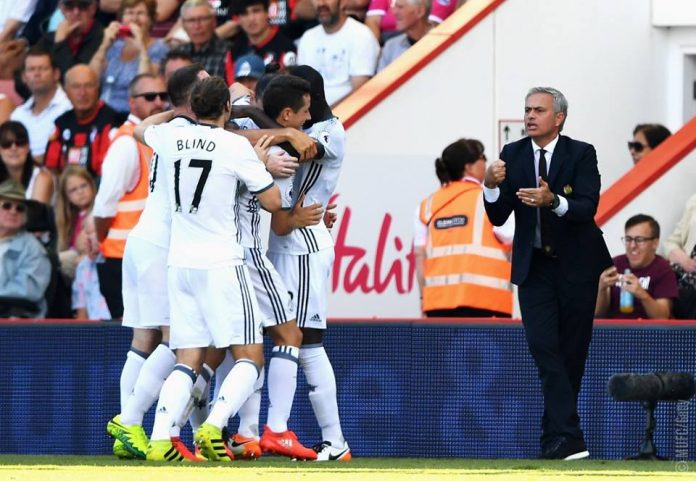 Goals from Juan Mata, Wayne Rooney and Zlatan Ibrahimovic kicked off Jose Mourinho’s era with a winning start away at Vitality Stadium. And despite an attempt of a comeback, Bournemouth failed to score more than one goal as well structured Man Utd’s backline provided few and far moments of error.

Here are the seven major talking points from Man Utd’s 3-1 victory over Bournemouth on Sunday:

1. Man Utd are genuine title contenders
An excellent overall performance from Jose Mourinho’s side reiterated Man Utd’s intention to challenge for the Premier League title in the Portuguese’s first season in charge.
And if and when the players will gel into Mourinho’s philosophy entirely, they are simply expected to get better game after game.

2. Ibrahimovic will continue to impress

Zlatan Ibrahimovic is proving more than a few critics that age is just a number. The speed and physicality required in English football doesn’t seems to be a problem for the Swedish centre forward and after scoring the winning goal against Leicester City in the Community Shield match last week, Ibrahimovic has now scored on his Premier League debut and is going to be a phonemenal signing for the Red Devils.
The 34-year-old has now scored on his debut in the Premier League, Serie A, La Liga, Ligue 1 and Champions League.

After suffering a knock in training, Jese Lingard was ruled out of match against Bournemouth and Juan Mata was handed the starting place on Sunday.
Despite his unpleasant history with Jose Mourinho, the Spaniard was picked to start ahead of Henrikh Mkhatariyan, Ashley Young and Marcos Rashford and still remains in the plans of the former Real Madrid and Chelsea boss.

4. Bournemouth need to work on their defense

A sloppy double-error from club skipper Simon Francis helped Juan Mata to break the deadlock at the Vitality Stadium, although its never a good idea to provide Zlatan Ibrahimovic with that amount of space and time for Man Utd’s third and final goal on the day.
Eddie Howe and his players will have to work relentlessly to avoid the drop and maintain their Premier League status next season.

The 22-year-old is now seen a potential future great for Man Utd after the Man of the Match performance on his league debut. Bailly is fearless, technically gifted player and very well composed on the ball and reminds Man Utd fans’ of former club captain Nemanja Vidic.
Bailly, who was also named as fans’ Match of the Match against Leicester City last week, could cement his position in Man Utd’s starting line-up for years to come and looks like a money well spent.

6. Jose Mourinho has identified his best back four

Great start. Nice to play my first 90 mins in the prem. But most important was the 3 points & the fans were unreal!! pic.twitter.com/LcY9FE2Yf4

The excellent performance from central defenders Eric Bailly and Daley Blind was well-matched by the untiring display of Man Utd full backs Antonio Valencia and Luke Shaw.
Mourinho will be more than impressed by his current back four, but perhaps Chris Smalling will retain his starting berth once he returns for the Red Devils.

Paul Pogba was banned for Man Utd’s trip to Bournemouth, and is now likely to make his debut against Southampton on Friday night. The Red Devils displayed an exceptional performance against a rather weaker side but Jose Mourinho’s side are poised to fight for the league title and will only get better in time, while Pogba’s return can make them unstoppable.