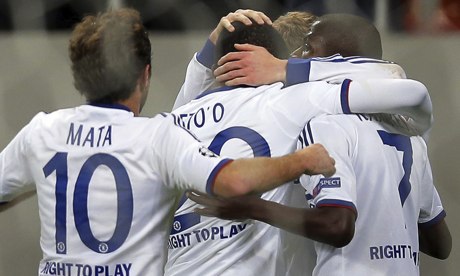 Chelsea’s 4-0 win away to Steaua Bucharest could not have come at a better time for Jose Mourinho. Having stormed out of the pre-match press conference over the predicament of the axed Kevin De Bruyne, the Portuguese will have been thrilled to have seen his side roll over the sleeping Romanian giants in a display of positive attacking invention and cohesive defensive structure.

The Blues came under intense criticism for their poor and negative display against Fulham two weeks ago; and their marked increase in performance against Spurs on Saturday failed to provide the three points they merited at White Hart Lane. But they turned on the style in Bucharest, dominating proceedings from start to finish, and racked up a score line which they fully deserved.

Ramires’ double, a fortuitous own goal from Daniel Georgievski, and a trademark Lampard pile driver saw the Blues run out comfortable winners on the night. Having lost their opening Champions League match rather tamely to a lesser Basel side, Chelsea’s often brilliant football will have gone a long way in banishing those demons.

“The result is obviously very good. The points and the goals.” Mourinho commented at full-time,

“The performance was very solid. We played well from first minute and kept control from then on. We played with intelligence and maturity. Playing away in this competition is not always easy.”

Juan Mata’s first appearance in this season’s competition was an excellent one, and he pulled the strings effortlessly, smacking a post and having a hand in two of the Blues’ goals with a performance that will put him firmly back in Mourinho’s plans for the season. The Spaniard will certainly be glad to be back in contention, and he highlighted the importance of the win on Tuesday,

“This is what Chelsea needed. The first game against Basel was a painful defeat. We showed we wanted to win. We played really well. It was enough to win.” Mata said,

“It will now give us confidence. The team played very well and were solid. I just have to keep going – I’m training well. I have to do my best after every training session and game.”

Ramires, who grabbed an unlikely double, had an equally influential game as Mata, showing off his incredible stamina and enthusiasm, while showing a cool head with both of his finishes.

While still without a goal for his new club, Samuel Eto’o lead the line superbly, ably setting off attacks, and looking every bit the live-wire striker we have come to know during his time in Italy and Spain. A first Eto’o goal for Chelsea is surely just around the corner.

Mourinho will have been pleased to see Andre Schurrle reacting to a individually poor first half display, as the German came flying out of the blocks after the restart, terrorising the Steaua defence, and providing a crucial turn of pace for Chelsea’s third goal. With the competition for attacking midfield places quite unique at the Bridge, given the abundance of personnel, his display will have surely given him real confidence for the coming weeks.

At the other end, the defence was assured, with John Terry following up his weekend performance with another strong display of leadership and dependability. His presence along with that of Petr Cech allowed for a first European clean sheet of the season.

Jose Mourinho’s first European adventure since returning to the Bridge is finally up and running after a difficult start, and this type of result will boost the shaken confidence around the club. But with away games at Schalke and Basel still to come, there is still work to do for Mourinho’s men; but if they can reproduce tonight’s display, few would bet against them topping the group come the end of the group stage.